× A place for more technical discussions. Please make sure you post in the correct section on the site, this way it keeps the site tidy AND ensures you get a more relevant answer.

Guessing I've got no chance with no lift then ?
Would they fit if the arches and bumper were cut ?


you will need at least a 4" lift,lots of trimming and a rocklobster box and alot of spare shafts. 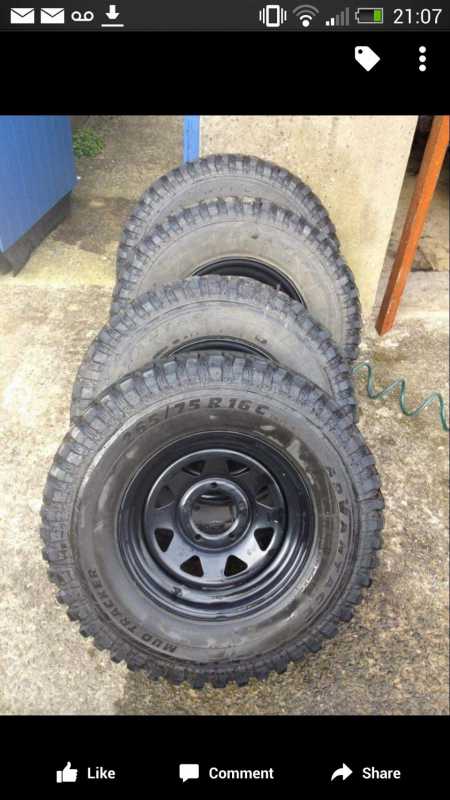 may aswell sell them on then

Guessing I've got no chance with no lift then ?
Would they fit if the arches and bumper were cut ?


you will need at least a 4" lift,lots of trimming and a rocklobster box and alot of spare shafts.

i'm on the look out for a set of 215/75 R15 to put straight onto the standard alloys on my Jimny to see me through the winter and some light off roading. Then will be doing a 2" lift next year along with some other mods to start some serious off roading.

Am i setting myself for a fall? i cant see any reasons not to use the standard 5 spoke alloys, after all they are in good nick. Alloys are 15 - 5.5J on a 55plate VVT

Less More
14 Oct 2015 18:54 #153660 by Daniel30
Replied by Daniel30 on topic Tyre Sizes - Rough Guide Thread
I think it's because they can be knocked back into shape were as the alloy would crack under severe circumstances. I done it because I prefer the steels but that's just my preference a lot of people do use alloys

I thought that was the case, but mine a currently round and not egg shaped, so if they are not broken i'm not going to fix them. LOL

Less More
14 Oct 2015 19:34 #153667 by Tommy-Boy
Replied by Tommy-Boy on topic Tyre Sizes - Rough Guide Thread
I'm fairly impresses with the Hankooks on page 3 of this thread. Seriously put cat amongst the pigeons that has!!

They look good and fit nicely, and the little write up seems positive.

03 Mar 2016 14:25 #163288 by ryanp3906
Replied by ryanp3906 on topic tyre size
Why is the biggest tyre I can get for my jimny without changing the gears etc I currently have 215 75 15 and was thinking about going a little bigger i only have 2" lift so thinking about just going slightly wider with them maybe 225 75 15 would I be okay running this size without changing anything

I discovered (and verified in practice) that the best "sensible" upgrade is to 205 / 75 / R15 size, just like many on those forums have recommended.

You essentially get approx 10 mm of extra ground clearance, more macho looking tyres, and stronger tyres when it comes to hitting potholes (less chance of tyres developing wobbles).
Gearing does change, but the general consensus is that it is hardly noticeable, if at all. The same goes for fuel consumption. I can attest to that from my own experience.

In theory, there should not be rubbing issues at all. However, in practice, you can expect some rubbing issues with the 2nd gen front bumper (2006-2012) and with front mudflaps, if you have those. However, they are easy to sort out (read more below).

According to south african forums, Suzuki's dealerships over there officially allow up to 3% of change in wheel diameter. Size 205 / 75 / R15 is 3,1% larger than 205 / 70 / R15, so it is officially supported over there (according to forum claims over there).

If you go any larger, like 195 / 80 or 215 / 75, you start an endeavor into a "murky" zone - you will probably get tyres scrubbing onto the wheel arches, front mudflaps or especially front bumper if you have a 2nd gen (2006-2012) bumper, and also the overall gearing changes so much that it noticeably affects car's road manners (acceleration performance, speedometer and tachometer accuracy, uphill pulling power and downhill braking power etc.). The fuel consumption is also affected.

If you go to the extreme, like 215 / 80 or 235 / 75, then you are entering a red light district without a cheap way out - you have to lift the car up, trim the wheel arches, install wheel spacers, change the transfer box, raise a new loan at the bank ....
Not to mention the additional wear and tear on the transmission, drivetrain, suspension, steering, and wheel hub assemblies. Also, get ready to visit the gas stations more often than you anticipated.

Before I installed new tyres, I measured and determined that my new tyres would probably catch on the main screw on my factory mudflaps, so I preventively disassembled the mudflaps, shortened the plastic spacer behind the mud flaps by approx 10 mm and then reinstalled everything.

As my 2nd gen front bumper had sagged slightly, I determined that the new tyres would probably catch on the bottom of the front bumper. So I trimmed about 15 mm from the bottom of the bumper with a grinder. The change is unnoticeable and invisible, and does not "hurt" at all.
Both trimmings took me about 10 minutes total time to do, and I am not a savvy mechanic.

New tyres fitted superbly, and it turned out that my trims to the bumper and mudflaps were justified.
Last edit: 09 Mar 2016 12:37 by Bosanek.
The following user(s) said Thank You: m3

Less More
09 Mar 2016 12:43 #163543 by Bosanek
Replied by Bosanek on topic Tyre Sizes - Rough Guide Thread
Another issue which is often overlooked is the question of the 5th spare tyre.

Whichever non-stock tyre size gets installed, the spare tyre size will no longer be the same.


The proper solution would be to purchase all five new tyres instead of four, and to replace the spare tyre with the new non-stock size. Rich guys usually do that, especially if they are using flashy AT or MT tyres, and they install the same spare tyre (without a cover of course), to make the best impression.

However, there are three issues with this solution:

A larger spare tyre might not fit on the back door because of interference with the back bumper or other parts of the car (depends on tyre size). In other words, the indent on the top of the back bumper might not be large enough to accept a larger tyre. The solution for that is to buy a spare tyre wheel spacer from JimnyBits, product code "sws".
A larger tyre is heavier, and that means additional stress on the back door hinges.
The original spare wheel cover probably will not fit over a larger tyre.


The "cheap" solution is to simply continue carrying your stock size spare tyre. That means that your 5th tyre is smaller than the other four. Below are the consequences of that decision:

I've been told that the tyre size discrepancy will not do any harm to the vehicle if you use the spare tyre on the front axle, and only in 2WD mode, becuase the front wheels are disconnected from the entire transmission in 2WD mode. So, if one of your rear wheels gets punctured, the procedure would be to remove the punctured rear wheel, remove one good front wheel, install that front wheel in the place of the punctured rear wheel, and then install the spare wheel in the place of the removed front wheel. Yeah, a lot of job if it's raining or night time.

But what if you get a puncture in the middle of offroading where you need 4WD to get to civilization?

I've been told that, in theory, the tyre size discrepancy on one wheel should not do harm as long as 4WD is used on rather slippery ground (snow, mud, very loose gravel), as one wheel will have to CONTINUOUSLY "underslip" in order to compensate for the discrepancy. Only very slippery ground can enable that.
The driver must pay strict attention to disengage 4WD immediately as soon as a patch relatively solid ground is reached, and then engage 4WD again if difficult portion is encountered, and disengage as soon as he passes through it, and so on. The spare wheel should always be installed on the front axle, because of the last portion of the journey where 2WD will be used.

All this sounds ok and manageable, except in the situation of rather rocky or bumpy DRY road, where you usually need to use 4WD-L 1st gear to pass slowly. Because the road is DRY and rather solid, there is not enough chance for the transmission to relieve itself of the continuous discrepancy (for a wheel to continuously underslip), and damage is possible.
Therefore, if you have to use a smaller spare tyre on a dry rocky or bumpy road, it might be better to use 2WD 1st gear instead of 4WD-L 1st gear.
That means you have to go through faster, or drive "improperly" by riding the clutch and/or the brakes. It's driver's decision whether to risk the damage to the suspension or drivetrain done by going faster through rocks and bumps, or to the clutch if riding it, or on the other hand, to risk damage to the transmission in 4WD-L mode.