As can be seen in the problems section, the Jimny wiring needs some serious attention - see Wiring!

A whole series of accessories have been fitted and the wiring for these needs to be rationalised and tidied up. In many places domestic mains cable has been used and lies loose on the floor.

The starting point for the re-wire is to plan the overall solution. Basically the plan is to create a separate "accessories" wiring loom with its associated fuses and switches running from the front of the vehicle to the back.

The diagram shows the overall idea.

I then expanded this into a fully developed wiring diagram, which is copied here

The core of the new solution is a switch panel located on the dashboard. I already have an ARB Locker switch which is very smart, it is made by Carling Technologies and matching switches are available in the UK through MUD STUFF. I ordered both some switches and a mounting frame from Mud Stuff and they arrived by next day post. The picture below shows the frame. 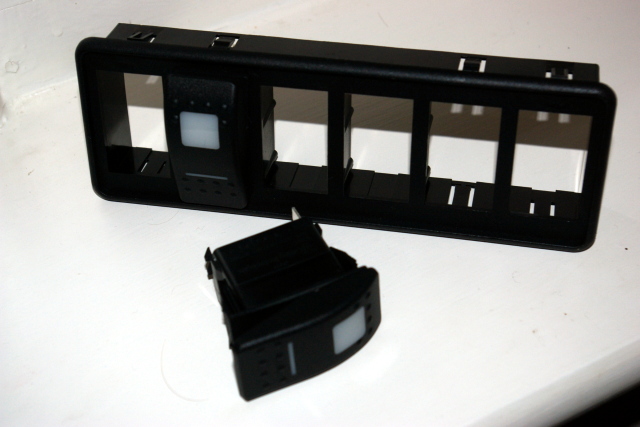 Creating a switch panel then involved a bit of design work to sort out the layout. The picture below shows the initial plan.

In order to mount the switches I needed a panel. Rather than make up a panel I decided to purchase an aluminium case from Maplin Electronics. I then stuck the switch layout to the front of the case. 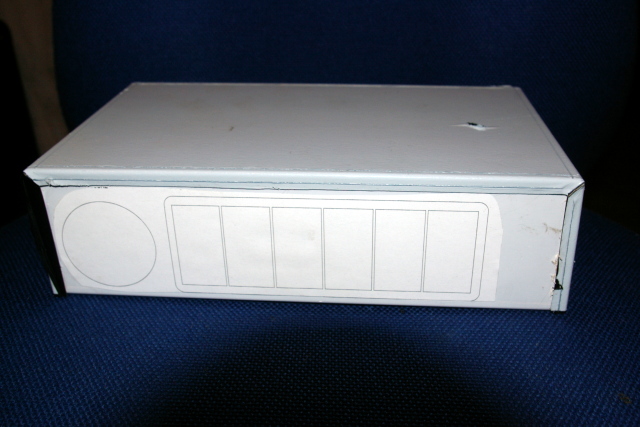 Using the layout as a template it was then straight forward to cut out the switch mounting hole and the hole for the Air Tank Pressure Gauge. 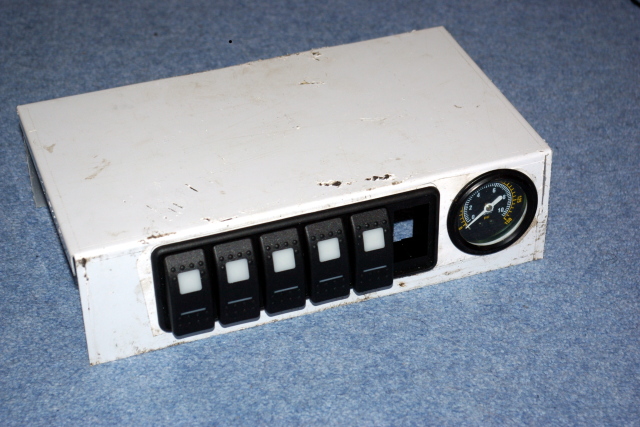 The box is still covered in a protective white coating at this stage which is why it looks messy and you will observe that the layout is now upside down. This is because an experimental fit under the dashboard showed it would fit better the other way up. It will be painted black later. The empty hole is for the ARB Switch which is still on the dashboard! 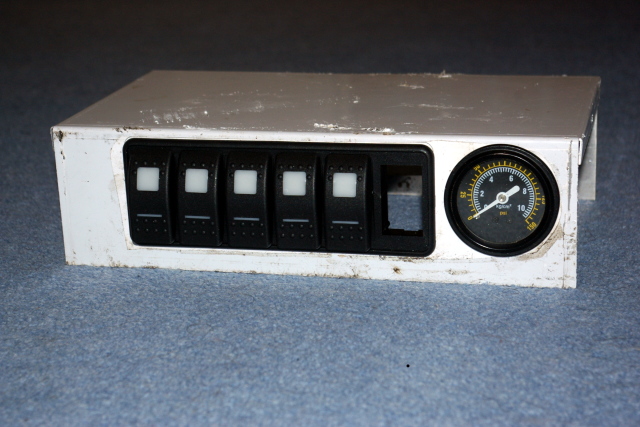 As can be seen above, the plan is to build up wiring looms to contain all the required wiring. The switch assembly is the heart of the configuration so I built up this loom first. 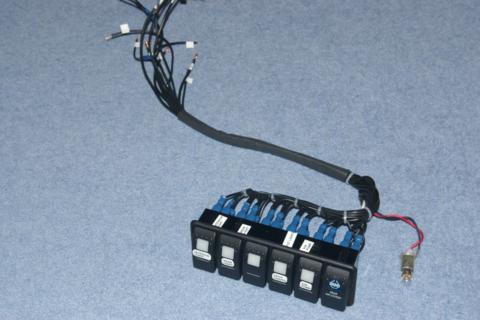 This loom connects back to the switch panel metalwork. Another loom was created through to the front of the vehicle and a separate loom to the back. 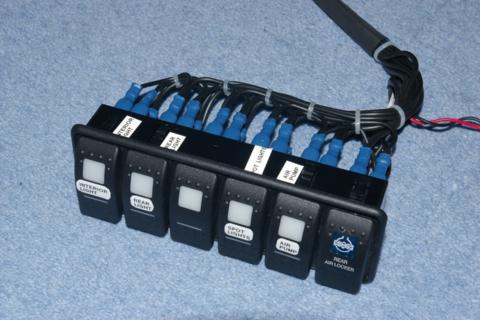 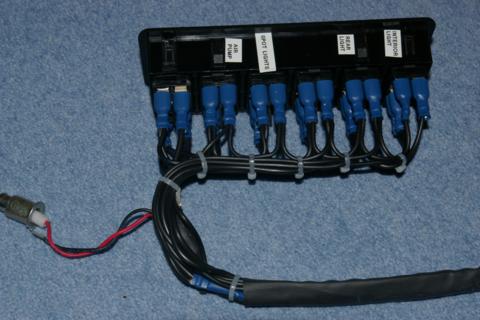 The picture below shows the first fitting into the car. It is bolted through to the metalwork at the bottom of the radio assembly. I have put the front, rear and switch looms in the car and they all join together behind this panel. 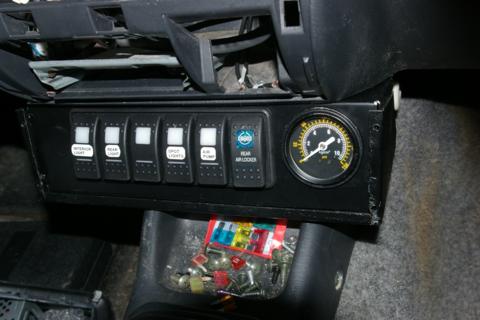 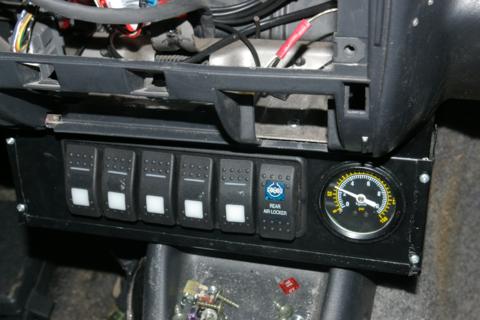 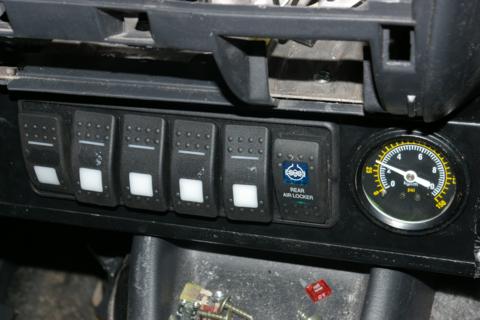 The finishing touch is some switch labels from MudStuff. These are clear labels that illuminate from behind. Sadly its difficult to get a picture of them lit up, but they do look good. See http://www.mudstuff.co.uk/CarlingLegends.html 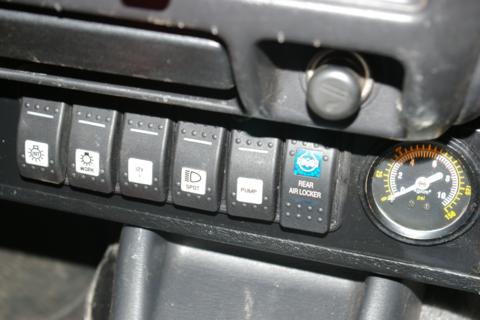 Finaly here is a look at the under bonnet end of the loom. The protected loom emerges through the firewall and terminates on a new fuse and relay pack fixed to theback of the engine compartment. 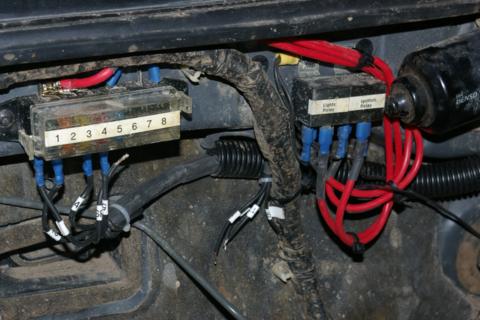 So the Jimny is now properly re-wired!. The next stage is to wire up the winch and 2nd Battery. See hereÂ for the next article in the series.

More posts from author
Friday, 12 June 2020 Fitting a lift kit to a Gen4 Jimny
Friday, 12 June 2020 Modifications and Upgrades to our Gen4 Jimny
Wednesday, 26 February 2020 Baofeng DM-9HX DMR
We use cookies to give you the best online experience. Please let us know if you agree to all of these cookies. Accepting the Cookies also accepts the Disclaimers for the website.
View GDPR policy Accept