For 7 years I ran a modded Landcruiser 80 series as my daily driver. My 4th Landcruiser 80. Loved every moment of it. I used to see Jimny's when I was off-roading especially around Wales and the Lake District and was always really impressed with how they performed and didn't get bogged down as I sometimes did in my 3.2-tonne behemoth, and could squeeze through some really tight stuff because they were so much smaller. I remember thinking they must be really tough and light. I recall especially in the snow when they sat on the snow instead of sinking into it as mine often did. That said snow never stopped me either unless it was up to the windscreen.

I sold the cruiser 3 years back and have really missed getting out and off-roading and green laning.

My best mate owns a 4x4 repair centre locally and whilst specialising in repairing Land Rovers (which keeps him busy all the time because they seem to break for fun) I was saying I missed the green laning and off-roading he said to me get a Jimny, adding "You won't regret it", they are really well built, and very reliable. His mechanic who has also had some capable off-road kit also said they were ace. So that was enough for me.

We started talking about a Jimny on Thursday last week and today I bought this to use as a trail vehicle.

52 plate
JLX model.
3 owners before me.
Last 2 owners serviced it themselves
MOT (with no advisories) until late September 2019 (MOT History looks good as well)
95000 miles

Drives well apart from a wobble on steering between 35 and 40 mph which I suspect could the Insa turbo tyres or a wheel bearing. He has had the kingpins checked and there is no play. Anyway should be easy enough to narrow down when I can get it on the ramp on Tuesday and have a good route around till I isolate it.

The Insa tyres are too aggressive for what I want. They look nearly new so I will be advertising them and getting some all terrains which I prefer.

There is also an occasional knock from the back (sounded like back left to me) but again we can track that down on the ramp. I can also have a much better look underneath than I could on his drive with my torch.

I think a Lockright locker and possibly some diff protection, the all-terrain tyres, plus a full service and all oils including diffs and gearbox, and anything else my inspections show up and we should be good to go.

Pics are screenshots from his advert so apologies if the quality is poor. 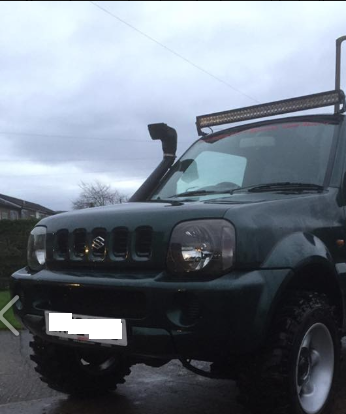 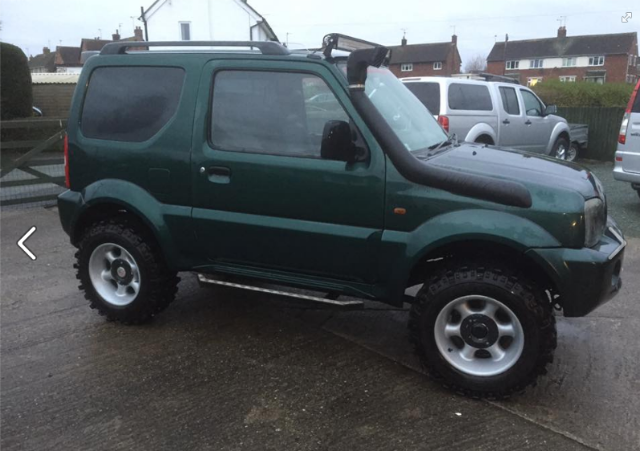 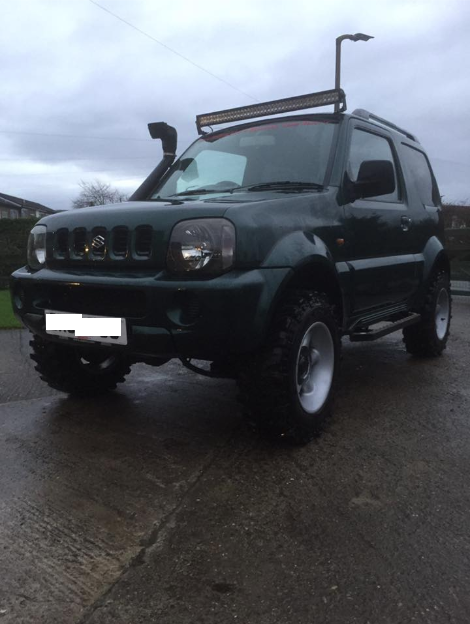 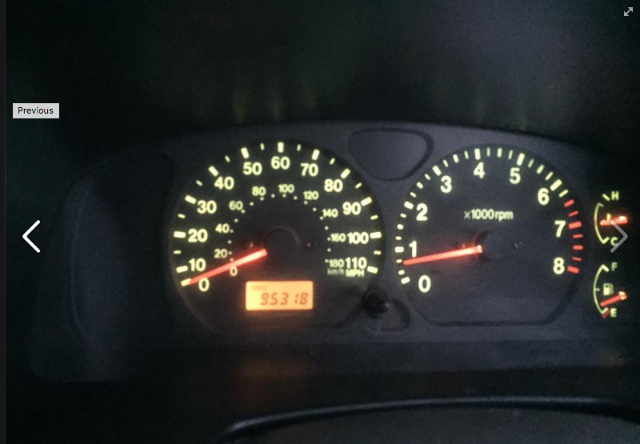 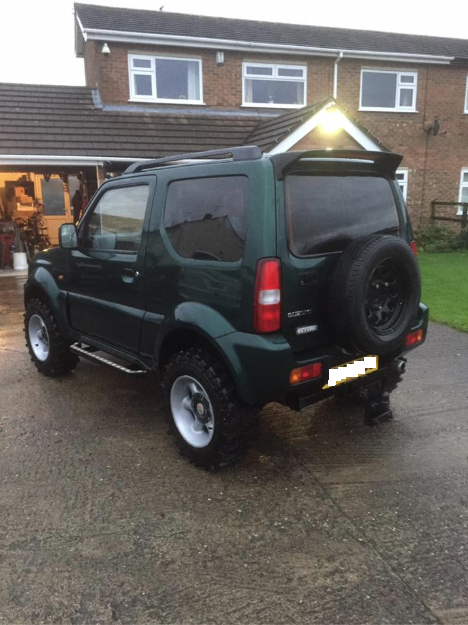 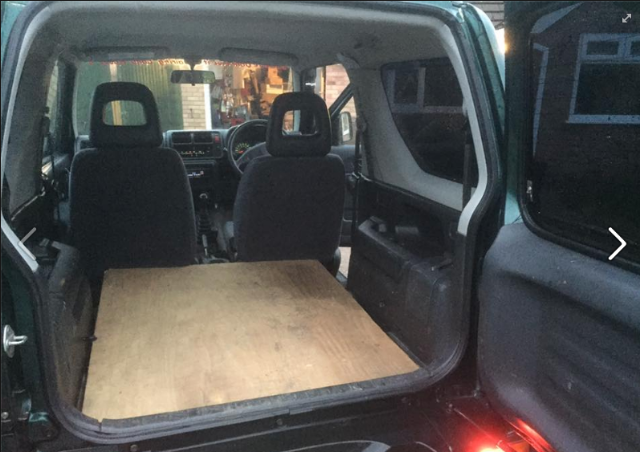 Less More
16 Dec 2018 16:46 #199067 by Max Headroom
Replied by Max Headroom on topic Just purchased my first Jimny
Greetings from the Cotswold hills, and welcome to the forums!

I see what you're saying about the tyres

Great to hear a reassuring word from someone involved with 4x4 repair centre!

She looks really nice, but must feel slow and tiny in comparison to your Landcruiser

Slow and tiny for sure. The Landcruiser was fast too since I had adjusted the pump.

For weekend fun and days out in Wales where I live I reckon the Jimny will be just perfect. I was smiling when I was driving it which is a great sign.

adrianr wrote: I was smiling when I was driving it which is a great sign.

Mine has that effect on me too

Very pleased overall with this being a 16 years old car.

Some surface rust under the boot floor area, and along the fuel lines. Got that cleaned up and coated with Hydrate 80. I'll get some paint over it tomorrow.

Back bushes will need doing next year. They are shot but little play.

Rearmost UJ had some play which could explain the occasional clunking. I've ordered a replacement and will fit it tomorrow. The original was stuck in tight!

Offside tie rod end had play in it. Replacement ordered. That could explain some of the wobbles between 35 and 45 mph.

Some leaking on nearside swivel and the offside swivel is not as smooth as I would like. Also, discs could benefit from a refresh sometime in the New Year. So I'll be buying the Kingpin Bearing with Swivel Seal Kit, plus 2 front discs and pads.

Cleaned all the leaves and debris out of the cabin filter which was pretty clean, just cluttered with debris.

I'll change the diff oils, gearbox and transfer case when I do the Swivels next year.

Picking up my new Hankook Dynapro ATMs on the 27th. I can keep the Insa Turbos for more serious off-road use.

Re-fitted the back seats.

Fixed the radio - was stuffed in at an odd angle - there were cables fouling the back of the unit so rerouted them and all is well.

Need to get the offside headlight out so I can see what is resonating behind the snorkel when accelerating. It is an interesting buzzy sound from about 3-4000 rpm.

Tie rod end replaced, steering wobble still presents but is much better and steering is much more precise.

Whilst checking the wheels and hubs noticed a loose wheel stud. These are longer than standard to accommodate the thicker wheels. The previous owner had used chemical metal to try to hold it in place. A few small welds on the back fixed that.

Noticed a small patch underneath the driver's side chassis needs a bit of welding so will get to that.

Less More
20 Dec 2018 20:16 #199246 by Max Headroom
Replied by Max Headroom on topic Just purchased my first Jimny
Sounds like you're seriously getting through a lot of much needed jobs!

Might I ask where you got the UJ with a grease point? - I've an intermittent clunk on mine - hopefully its a UJ and not the diff causing it.

Less More
20 Dec 2018 22:10 #199254 by adrianr
Replied by adrianr on topic Just purchased my first Jimny
Yep, working through them - I will refurbish the swivels and front brakes next year.

Just ordering the bits so I can extend the axle and diff breathers.

I'll be looking forther at curing that resonance on the intake side tomorrow.

The wiring for the light bar needs improving, not a fan of Scotchlock connectors, and excessive wiring runs. It'll soon be soldered, shrink wrapped and tidied up.

Found some nice thick rubber interior mats, and looking at wind deflectors so I can have the windows down a bit in all weathers.

There was some discussion on the wind deflectors a short time back.
Some of them are pretty big but from my memory those may be the Australian ones.
I'm torn between Genuine Suzi ones or the ones on eBay (think they were Heko or some such brand) - Think the Suzi ones slightly bigger then Heko. Some folk dont like them but Ive got a convertible and it 'pants' with just the targa open - hopefully I can change the dynamic pressures slightly by fitting some.

You can't beat heat-shrink... it has a million uses other than just cable joints!

I had the larger more bulbous ones on my Landcruisers, and the Pajeros before that. One the cars I have the slimmer in channel Heko ones that are good.

Undecided yet for the Jimny but on the cars they change the pressure sufficiently so you can sit on the motorway with the windows down a bit and not get that awful drumming.