While the guys have some down time in Budapest and Les prepares for the next stage of his journey on his own I thought I would introduce you to the latest member of the team .... Michael Bailey.

Mike is married with two daughters and 4 grandchildren. A Career Army officer, REME, 1954 to 1977 serving in the UK and Malaya followed by 15 years as a management consultant on contracts in the UK and the Sudan.Â  Change of scene in 1990 he developed a wedding and portrait business in the Christchurch area. Â He retired from the business in 2002 to carry out all the administration, for his wife's ladies fashion boutique in Christchurch. 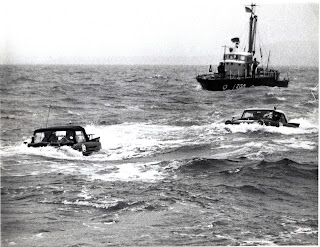 Crossing the English Channel, Dover to Calais in an Amphicar Mike's more sedate interests now includeÂ photography, long distance walking and oil painting. He says he's much looking forward to the Jimny Challenge, which he will join on May 9th on the stage from Novosibirsk, (Russia) through Mongolia, back into Russia and on to Vladivostok to catch the ferry to Japan and flying home from Japan on the 11th June.

More posts from author
Saturday, 20 December 2014 Continuing the story ......
Monday, 27 October 2014 A simple overtaking manoeuvre that went seriously wrong
Saturday, 05 July 2014 Visitor to the BigJimny store
We use cookies to give you the best online experience. Please let us know if you agree to all of these cookies. Accepting the Cookies also accepts the Disclaimers for the website.
View GDPR policy Accept