Less More
02 Mar 2020 05:29 #219266 by Lambert
Replied by Lambert on topic Kirkynut's Jimny (aka Daddy's Tractor) - The Evolution continues...
Excellent news. A Jimny is the perfect companion for a daily drive, small for town but fun in spades!
Dreadnaught (black 2011)

Less More
26 Apr 2020 23:47 - 27 Apr 2020 00:03 #221546 by kirkynut
Replied by kirkynut on topic Kirkynut's Jimny (aka Daddy's Tractor) - The Evolution continues...
Seeing as we can't do much with our Jimnys at the moment and I am a key worker I stopped on my way home from work tonight to take a couple of snaps as something fun to do with it. It's all a bit urban but that's all I can do with the restrictions at the moment! 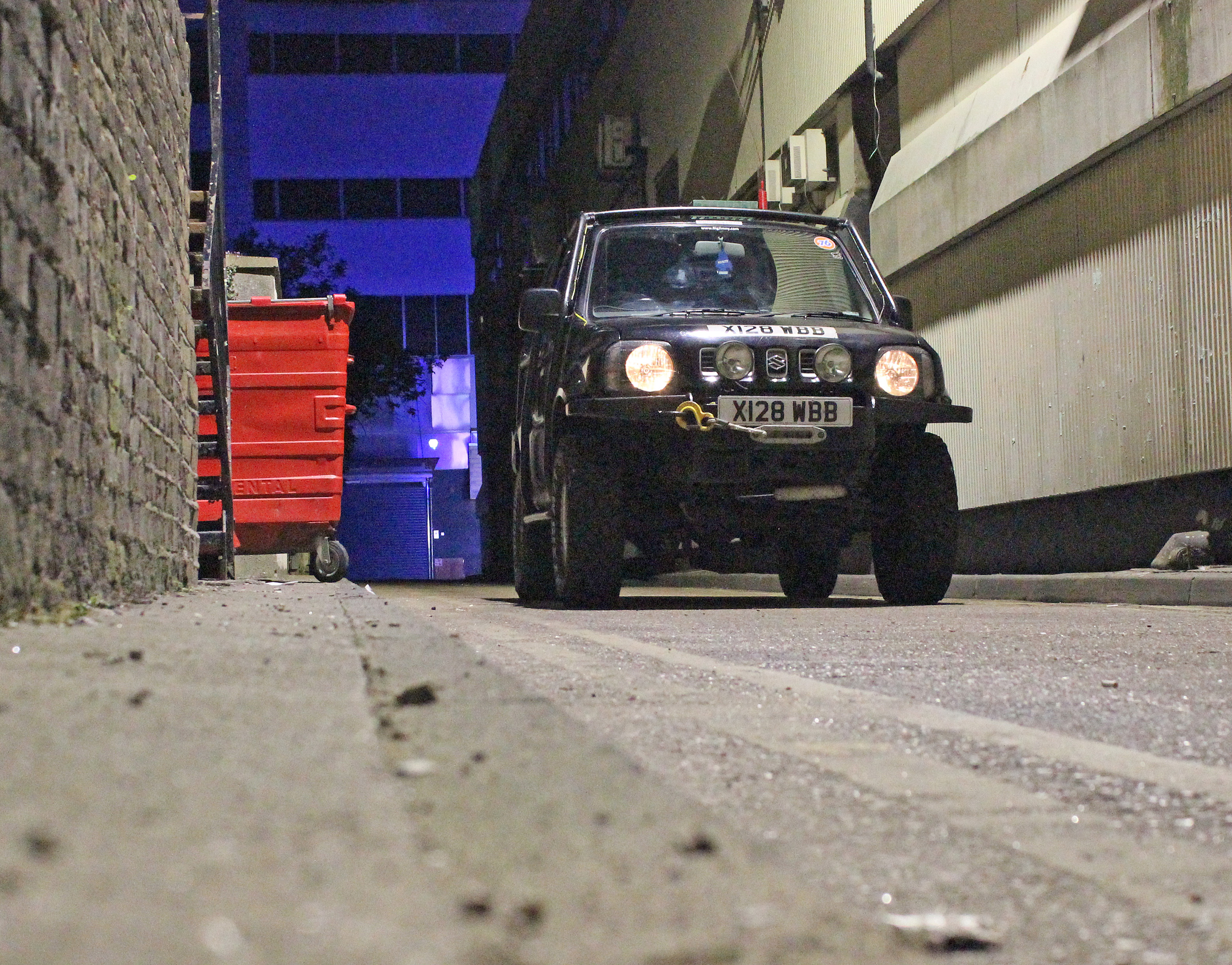 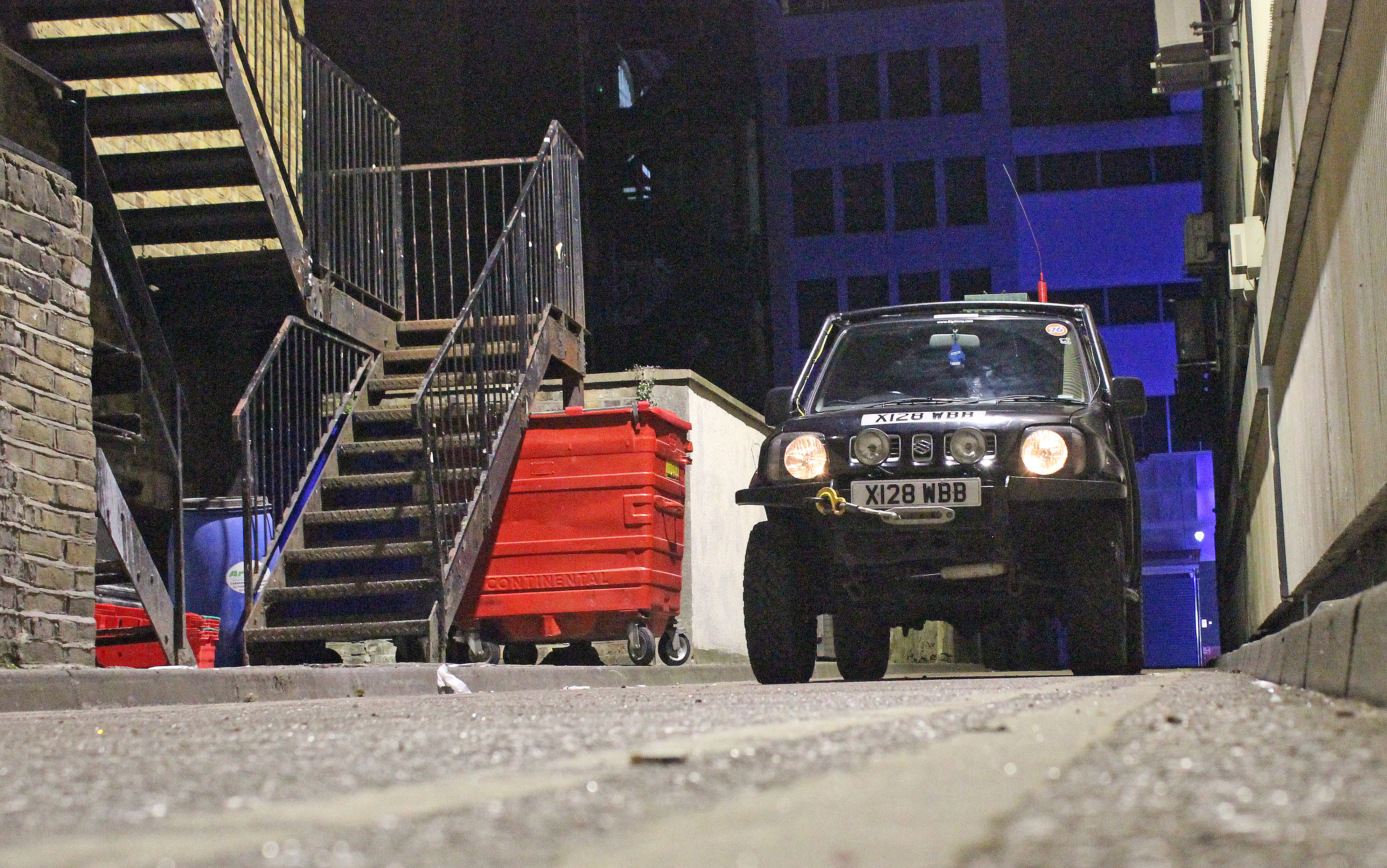 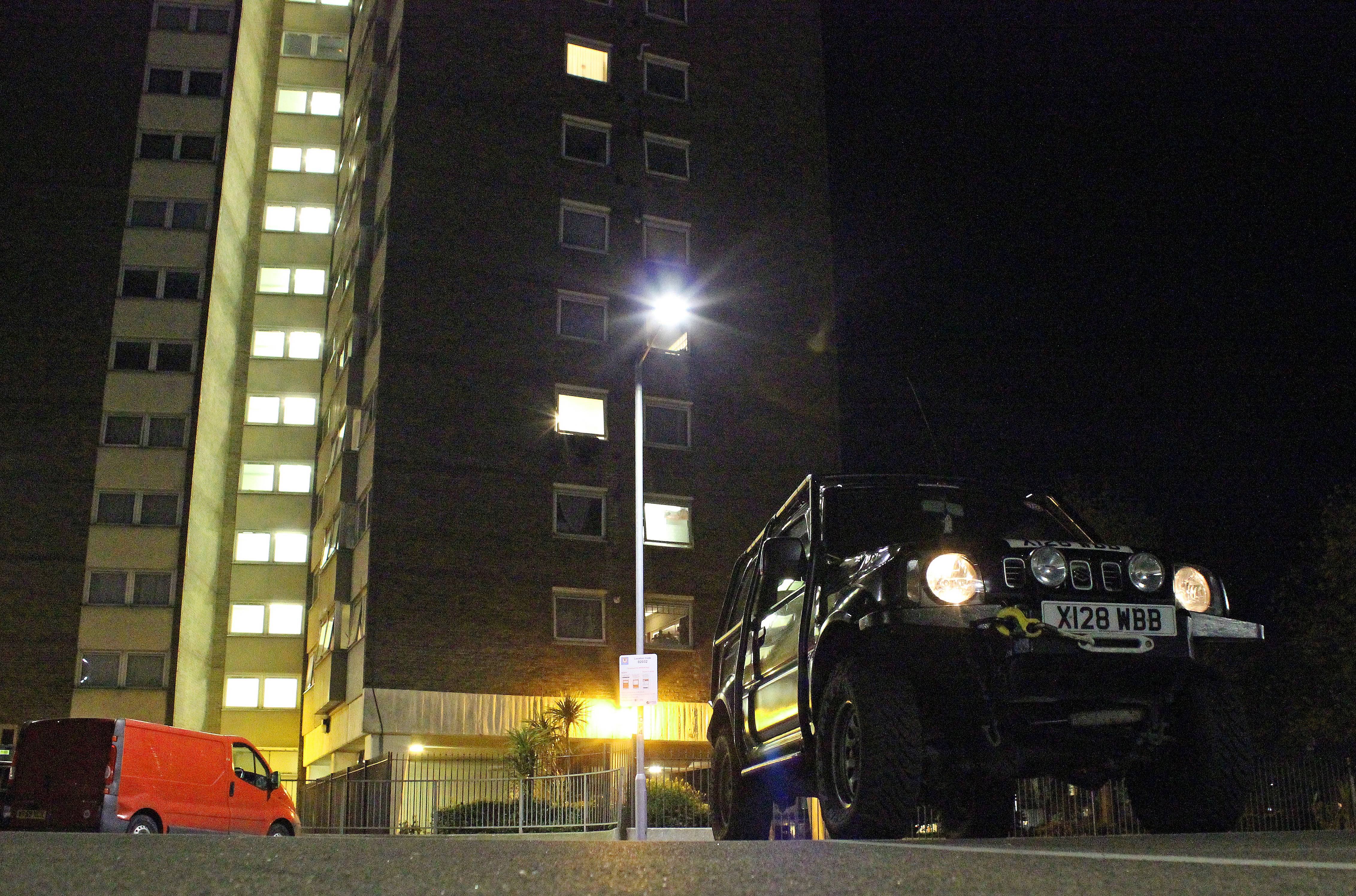 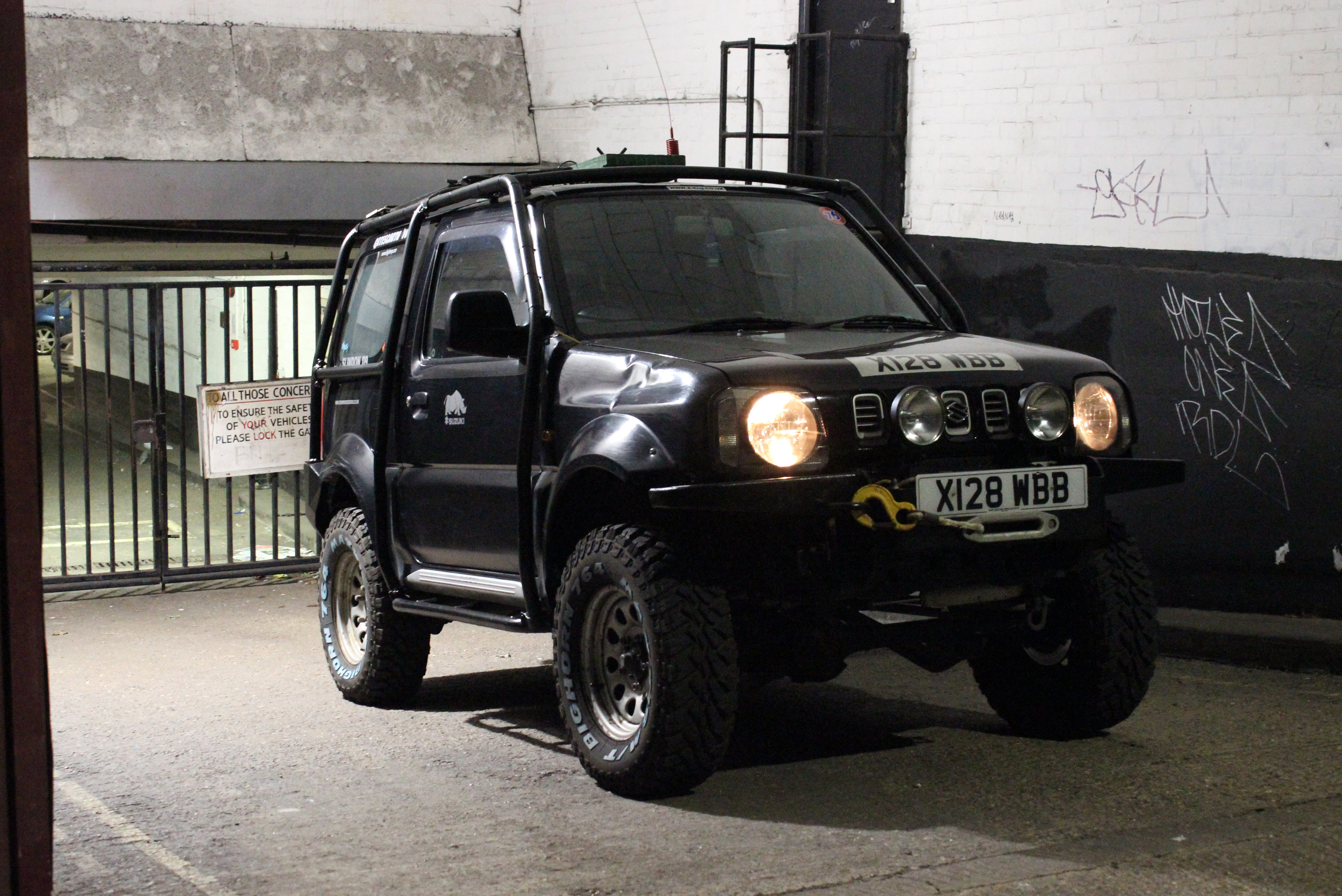 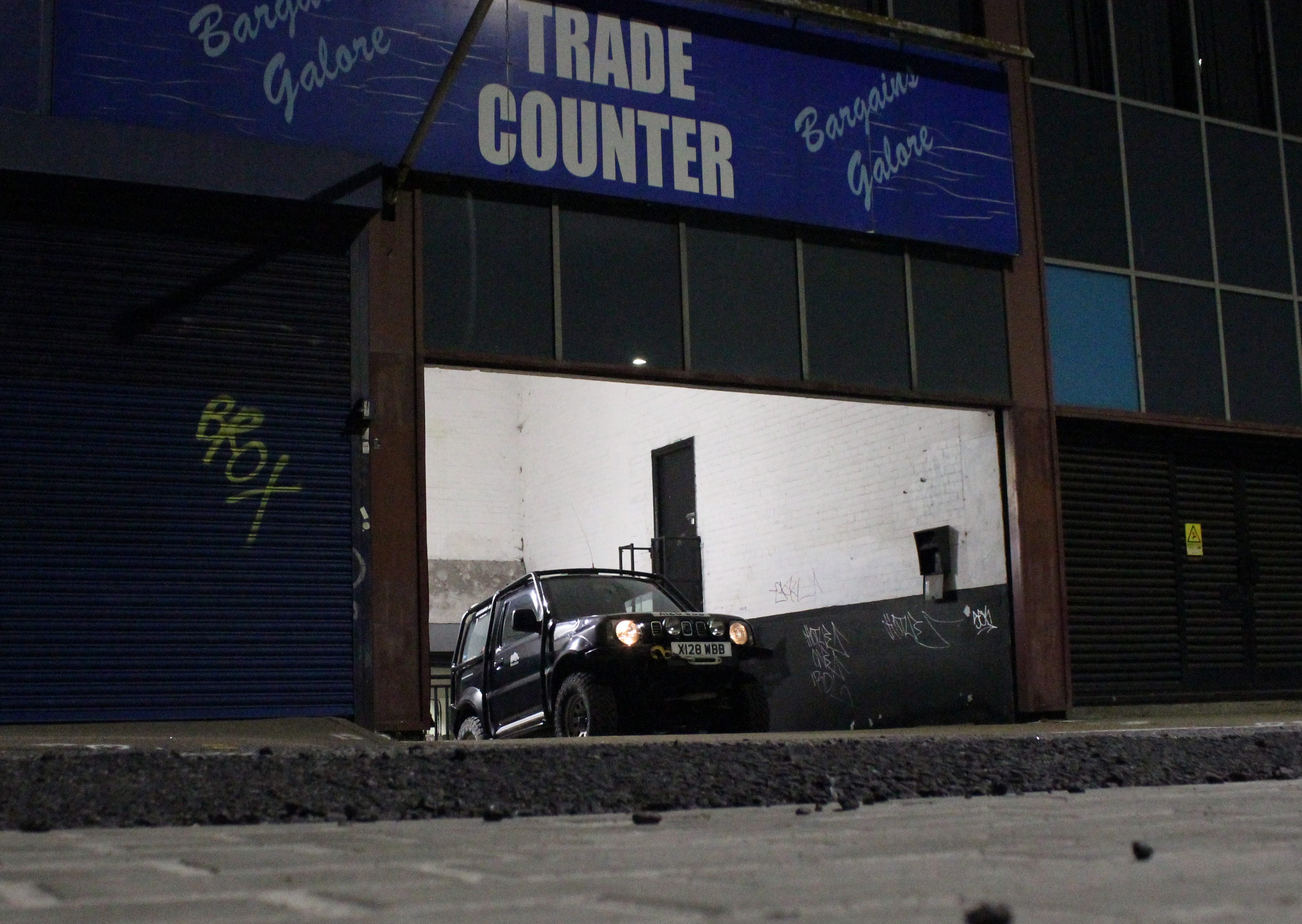 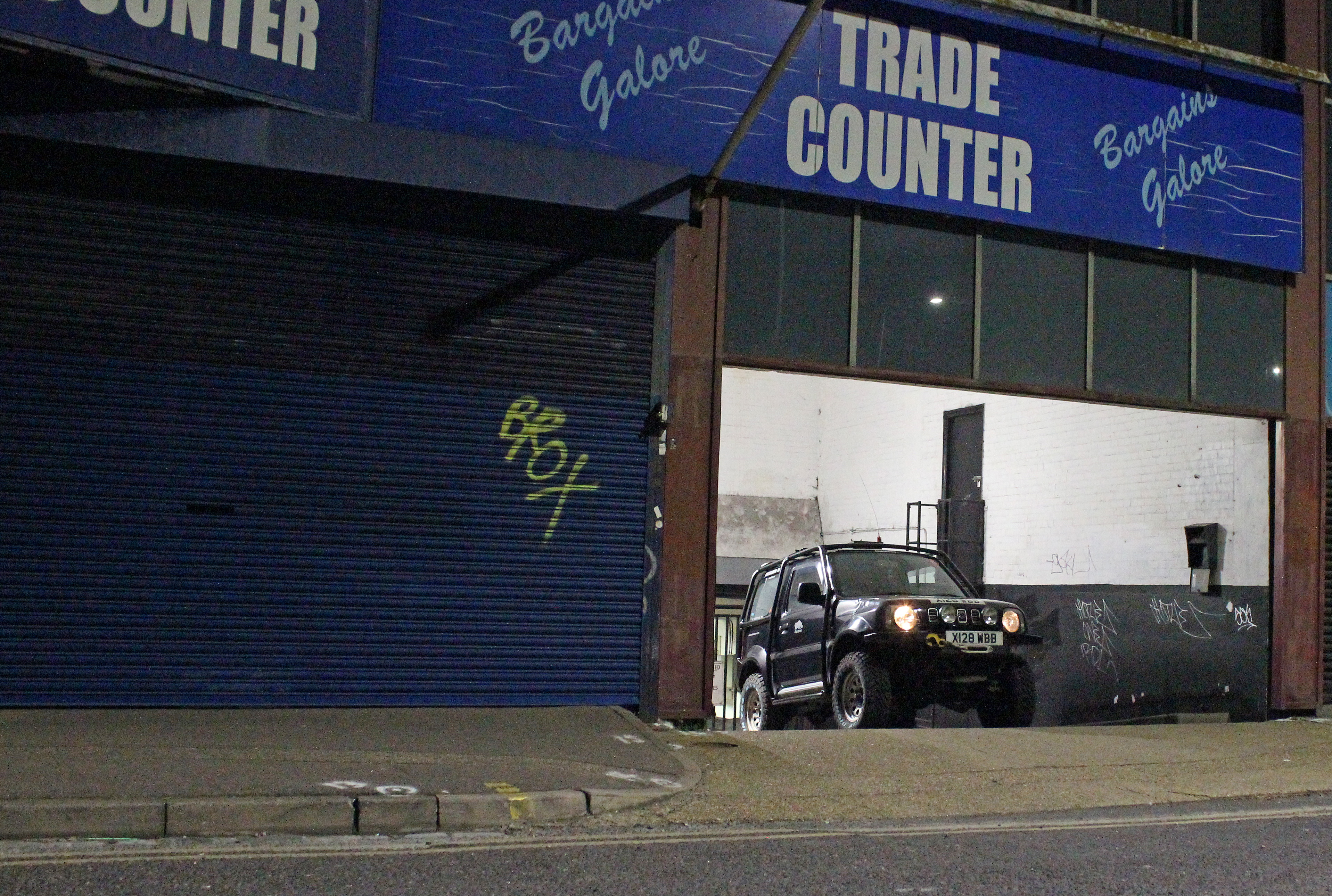 The kingpin bearings I replaced last need attention as I have a small leak from the driver's side swivel, so I ought to have shimmed the kingpin bearings it seems. I have some annealed copper washers from the BigJimny Store that don't seem to be listed any longer that I shall use on some new bearings to take up the slack as I have had success with these previously.

I also have some SJ manual freewheeling hubs, so bought some adapter rings from Jimny Bits this week and will fit those when I change the kingpin bearings. I've been running fixed hubs with no issues but now it's my daily and I've had the manual hubs, I might as well put them to good use.

Less More
27 Apr 2020 10:15 #221560 by gusthegorilla
Replied by gusthegorilla on topic Kirkynut's Jimny (aka Daddy's Tractor) - The Evolution continues...
Yes, I'll add my photographer's approval to these too, Kirky...nice work

Less More
27 Apr 2020 11:25 #221562 by Reason2doubt
Replied by Reason2doubt on topic Kirkynut's Jimny (aka Daddy's Tractor) - The Evolution continues...
Those are some really nice shots. Lighting and angles are great! Love the surroundings.

Less More
04 May 2020 21:40 #221894 by kirkynut
Replied by kirkynut on topic Kirkynut's Jimny (aka Daddy's Tractor) - The Evolution continues...
The other day I replaced the kingpin bearings on the driver's side of Daddy's Tractor as my Jimny is now affectionately known by my 4 year old son and he helped too!

His Mum was at work and was working from home the next two days whilst I was off and I didn't know that he would enjoy it as much as he did, so figured if I could at least strip it down I could then put it back together when he was in bed.

However I involved him as much as I could and he loved it as the photos below show. As such we were able to get the whole job done in a day, which I could usually finish in a couple of hours but at least it got done!

Whilst I thought the kingpin bearings were going to be the issue, despite them not being on the car too long, as I went to put the wheel bearing carrier back on, I could hear that the wheel bearing was indeed shot and made a terrible noise.

Fortunately I had an old one in another carrier that I had removed years ago that had no known fault but I changed in preventative maintenance when I used to go mud plugging. It is temporarily in place and I have since made up 2 new bearing carriers with new bearings in from Jimny Bits as the Big Jimny shop did not have them in stock. They are a cheap brand though, not Koyo, so I'm not sure how long they will last. My press came in useful.

I have also got an old set of Aisin manual free-wheeling hubs, so ordered the spacer rings up from Jimny Bits whilst I was putting in an order. Given I'm using my Jimny daily now, I thought it might be a good idea to use these as I had them.

Here's my boy helping (hindering) me out: 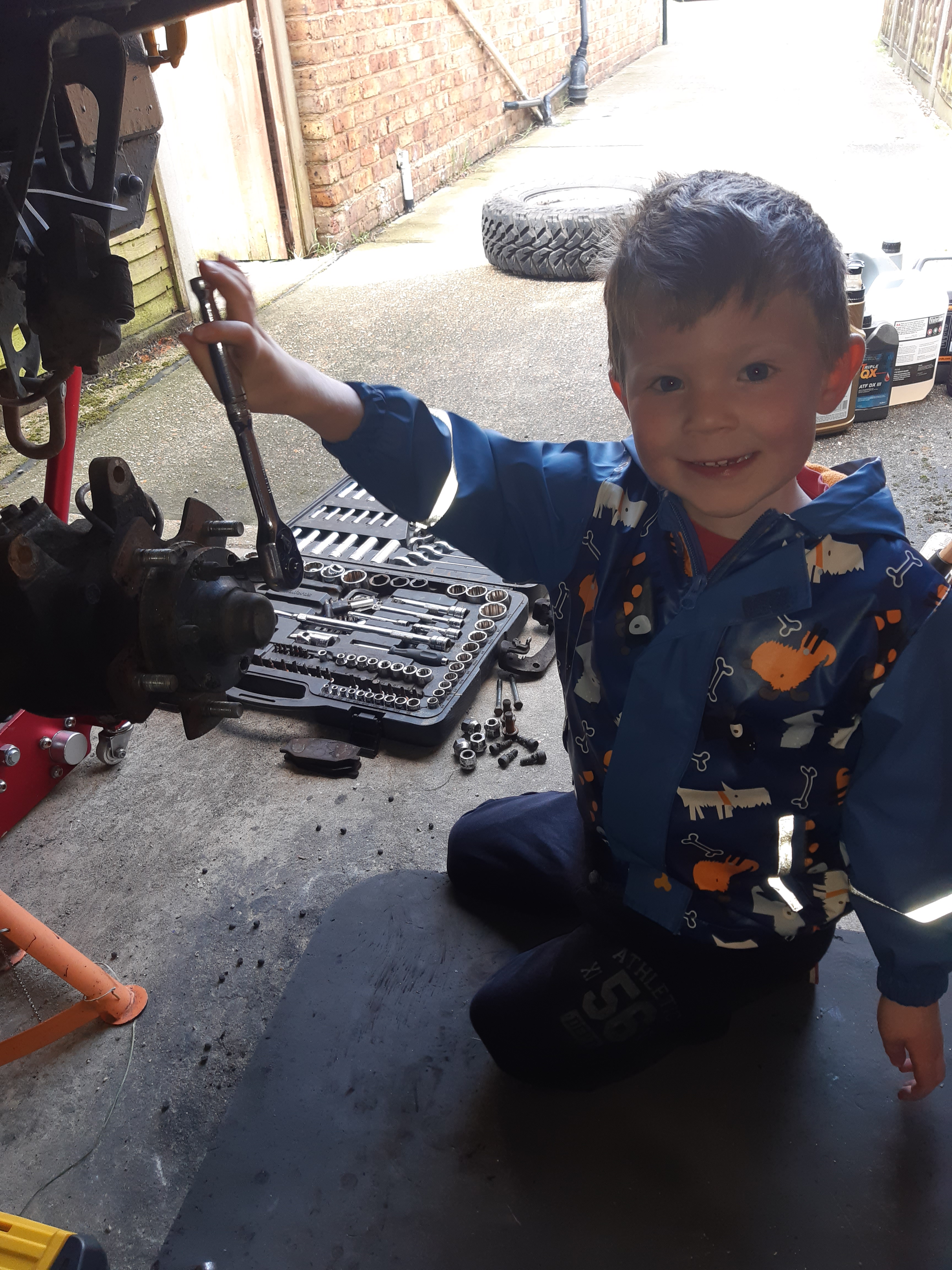 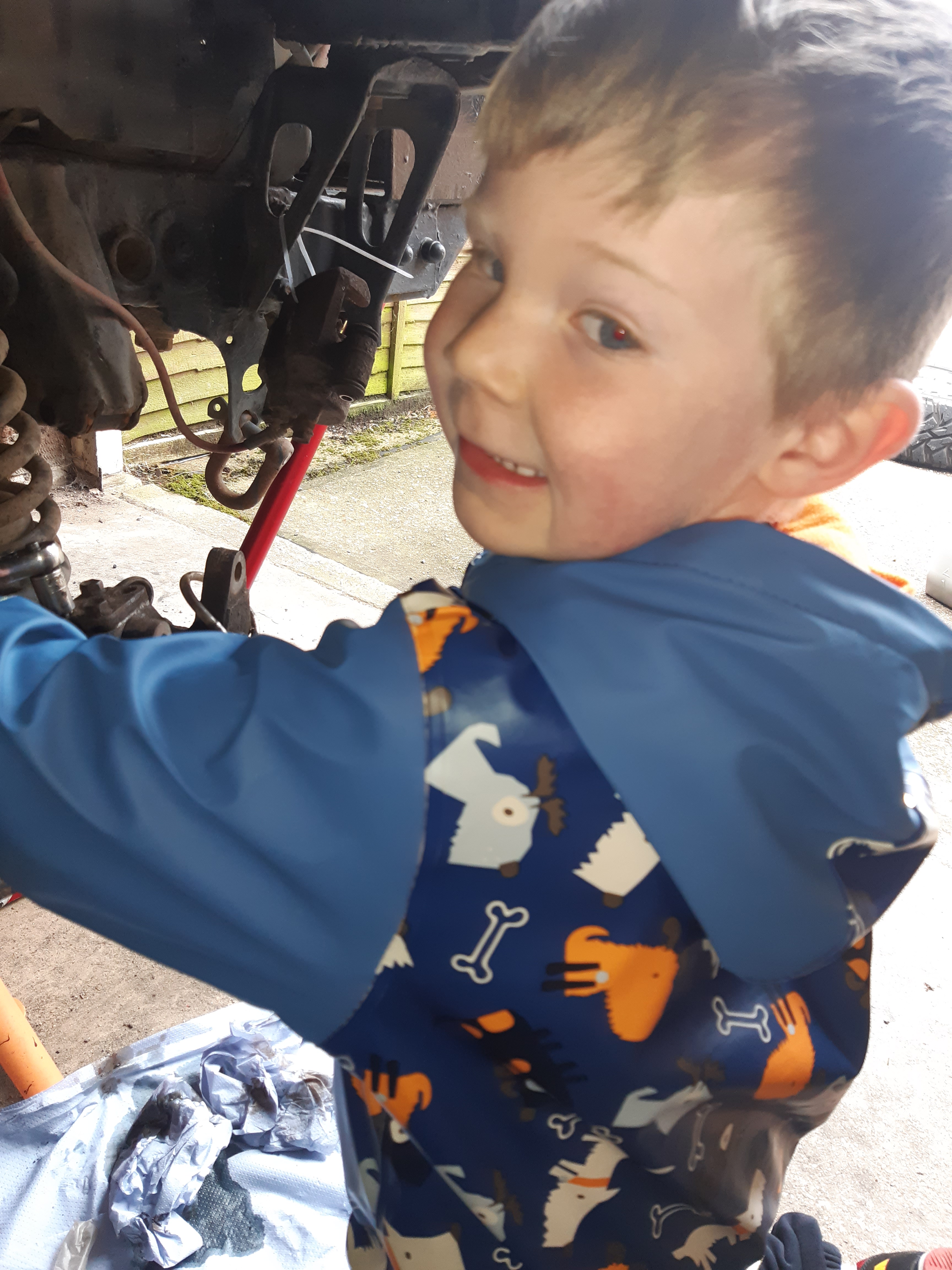 Then the next day whilst I was pressing out the old bearings from my spare bearing carriers and then pressing the new bearings in he fixed his motorbike and decided something needed fixing under the rear of Daddy's Tractor. 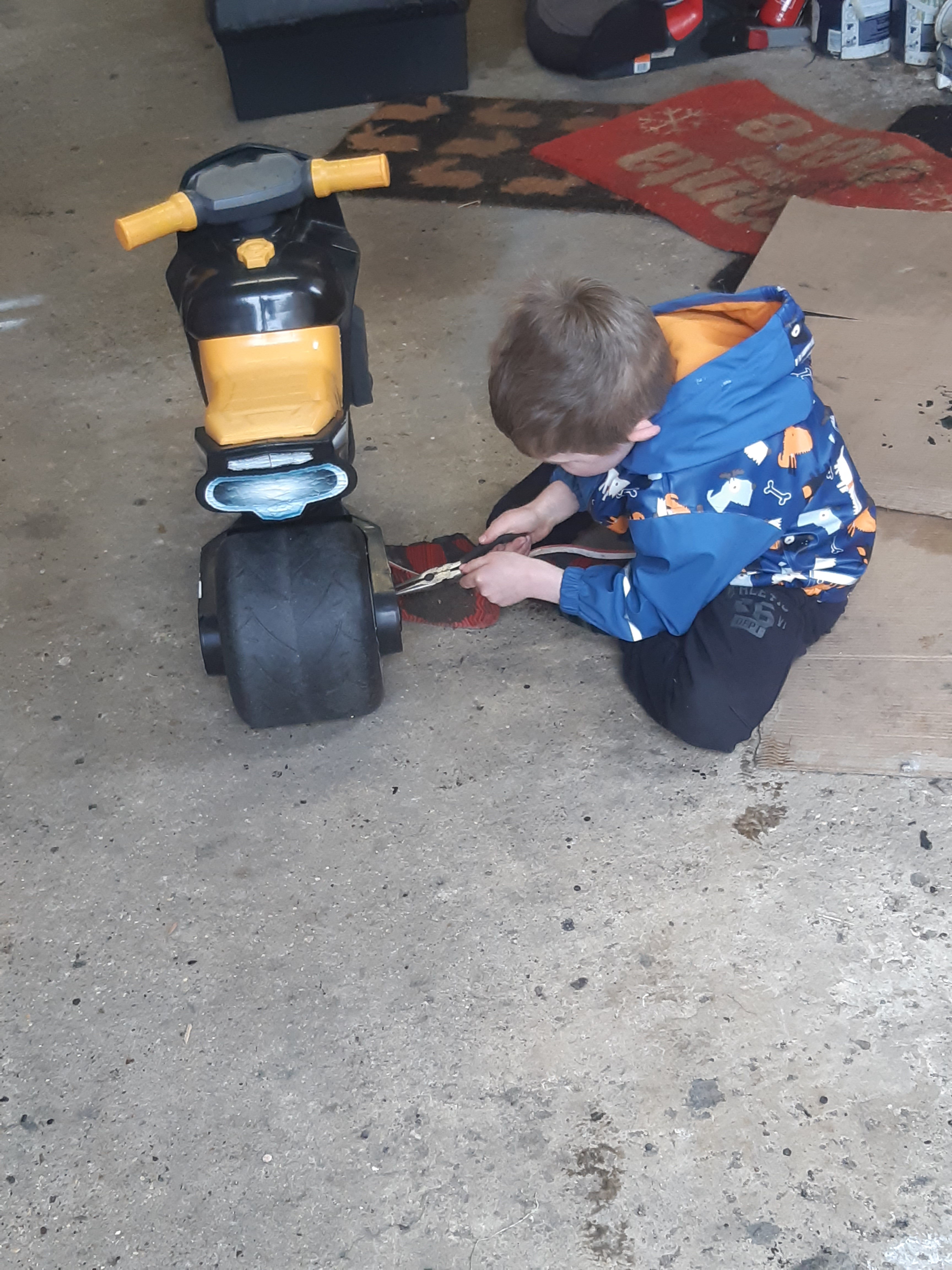 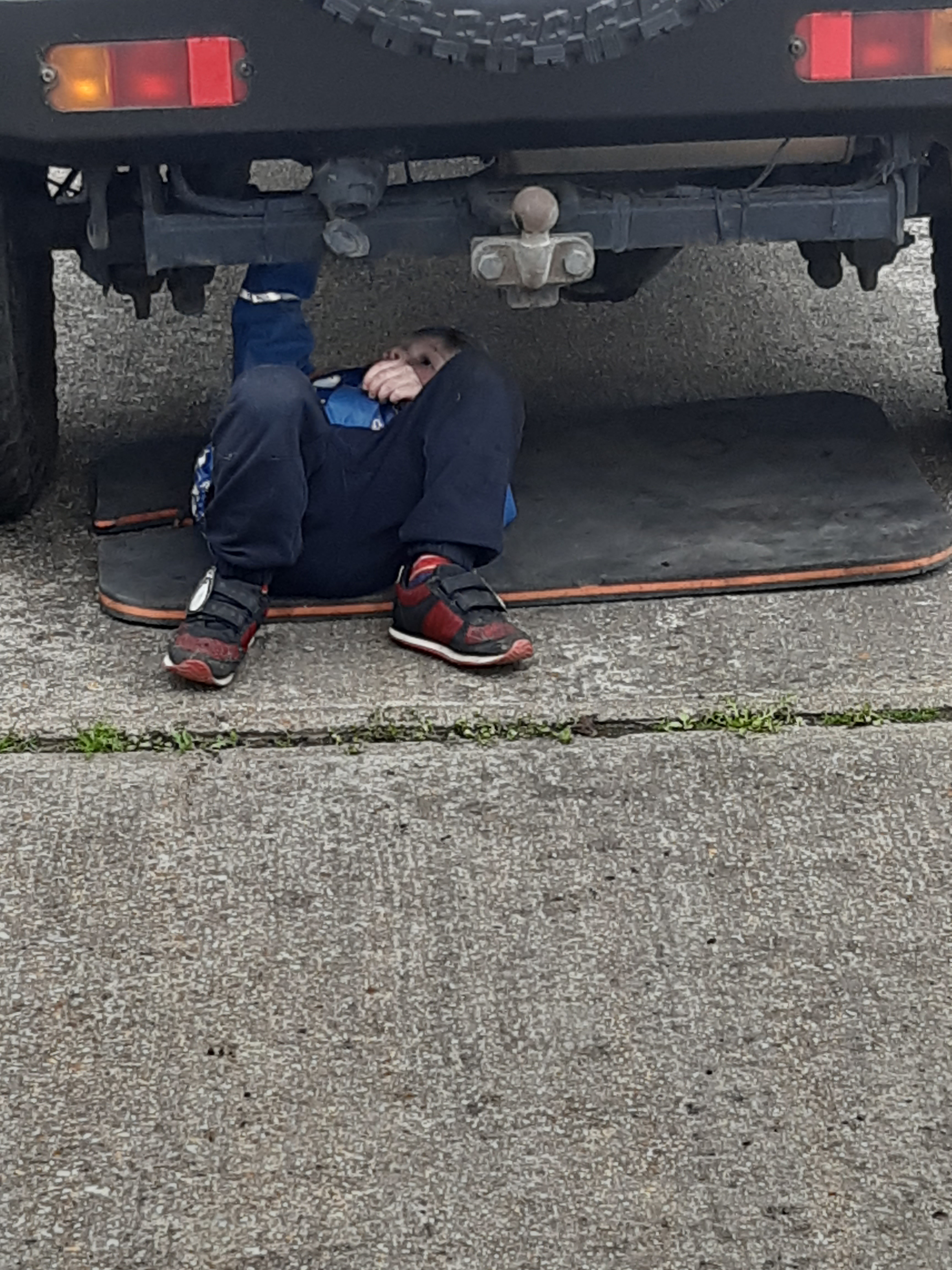 My front brake pads are coming towards the end of their lives and my discs look like they have seen better days. My calliper sliders have been seized and freed off a fair few times in their lives, with new tubes and seals, lubricated with red rubber grease but once again they are seizing.

I have therefore treated it to some new callipers off of eBay and will fit the new wheel bearings, new discs, pads and callipers on a rest day when they have all arrived.

I also have rear shoes coming from the BigJimny shop but probably don't need them and will likely just need to adjust the rears up. I'll have them in stock in case I need them though.

I'm using this daily now, so I need to be on top of maintenance. It's a lot cheaper and easier than the old Beemer though and nothing has gone wrong as such, it's just good old maintenance of an abused old off-roader!

I've been out to bed them in ready for work on Monday.

The wheel bearings that came from Jimny Bits are not Koyo but the price perhaps reflected that. We shall see how long they last.

I've received my new rear brake shoes from the Big Jimny Store in case they are worn when I get chance to look. I also got the last set of Kingpin bearings Martin had in the Store too, ready for the next time they need changing.

I have a spare set of front bearing carriers, so I was able to make them up with the new bearings in advance. I have a press to do this now too, so it's easy.

I had a little wobble on the steering wheel developing at dead on 50 mph but there's nothing after today's work, so that's great!

Now time to settle down with a non alcoholic beer as I'm on Warfarin and a film with the Mrs as the boy has just gone to sleep!