Some images in the article (if present) can be enlarged by clicking on them.

So you are considering to buy a Jimny?

Whoever you are, your story probably matches one of these:

Whatever your background story is, this article will cover most of your answers.

This article will also provide some specific useful information on what to test / look out for when buying a Jimny, in order to avoid buying a problematic one.

Just to clear up any confusion, below are the pictures of vehicle models which this article refers to.

A Jimny 3 owner from Brazil wrote a comprehensive essay on various advantages and disadvantages of driving a Jimny 3 after his extensive 6 years of daily use.
(Use Google Translate if you don't understand Portuguese)

Another good source of information on about all Jimny models and generations is Generic world Wikipedia article on Jimnys.

For those who are completely unfamiliar

Read the wiki article "Cargo space expansion and management" for more info about the topic of Jimnys and cargo.

For those who are familiar with all-terrain vehicles

The wiki article "Manuals and owner's guides" has all the editions and variations classified in more detail.

There are several main editions of 3rd generation Jimny.

All that is currently known is that there are two major editions - narrower edition for the Japanese domestic marker and wider edition for the international market. They can be visually distinguished by the presence of extended wheel arches on the wide edition, which are not present at all on the narrow edition.

As of 2019, it is still way to early to tell what plagues Jimnys 4, so it is only assumed here that some of the indicated issues might more or less plague them as well.

The wiki article "Common problems - overview" contains a a lot more details on some issues, and also contains links to some dedicated wiki articles about certain problems.

Below is the quick check-list & summary of the usual points to which a potential Jimny buyer should pay attention when buying or considering a purchase.

Swivel balls on the front axle

Worn chains in the transfer box 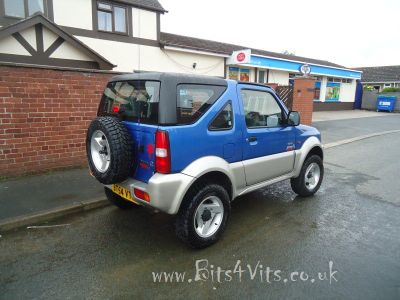 The wiki article "Rebuilding the R72 gear box" covers the resolution of the failure of R72 gear box.

Much more information about diesel Jimnys is present in the "Diesel (DDiS) Jimny specifics" wiki article.