Swansea to Rome! 2 Day roadtrip in a Jimny

Less More
24 Jun 2020 15:04 #223944 by Reason2doubt
Swansea to Rome! 2 Day roadtrip in a Jimny was created by Reason2doubt
Made it to Italy yesterday evening which was reasonably unproblematic.

Car seemed to handle it very well over the 1300 miles.Here's a little breakdown for anyone interested:

Sunday 21st June 22:00: Set off from Swansea to Folkstone to get to the channel tunnel for 5:30am departure to France. We arrived a bit early and had a chance to chill and have a quick nap (which didn't happen due to excitement). A quick coffee break using a Jetboil at the back of the car to keep us going. We were carrying 10 litres of water on the roof so we didn't have to fill up anywhere along the whole journey. 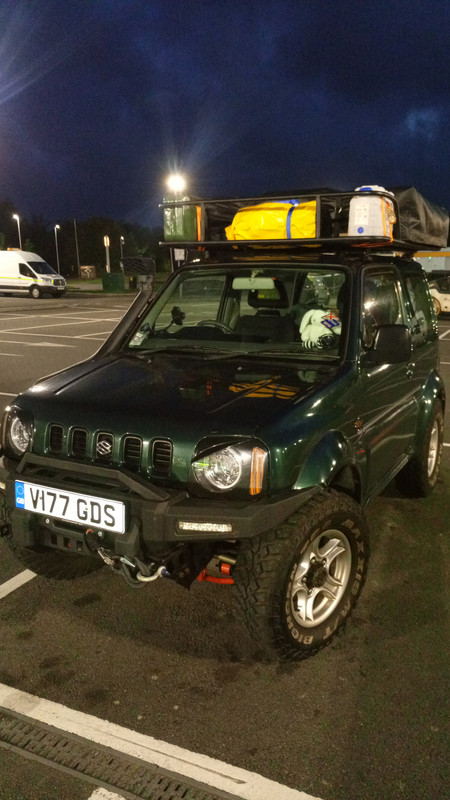 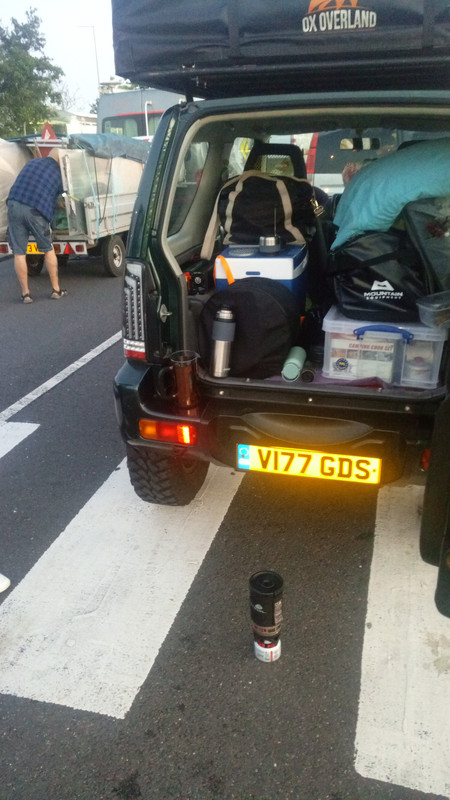 After the channel tunnel, we arrived in France at 7:00 am (local time) after a very quick 35 minutes on the train (we fell asleep so it felt like 5 minutes). Strangely enough, no restrictions on entering France given the whole COVID situation - no checks in place.

We drove through France which was uneventful; stopped a few times to grab some rest but we just wanted to get the miles under our belt this day. 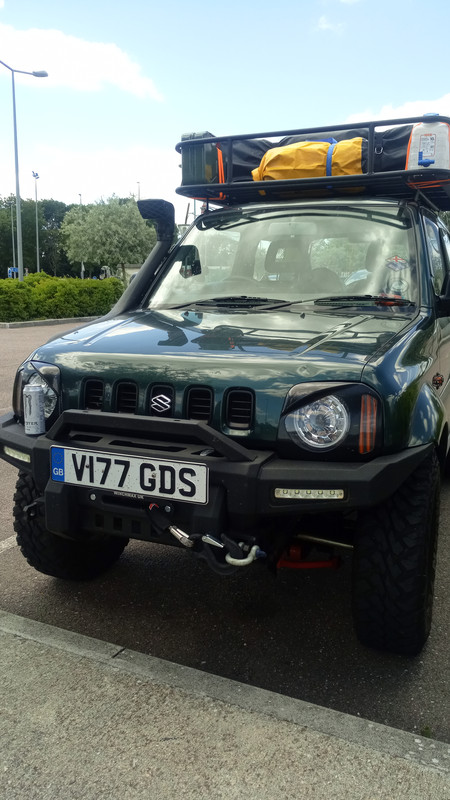 Car looking a little splattered with bugs but really not as bad as I thought it would be.

We had anticipated getting through to Italy via the Mont Blanc tunnel however it was closed for work that evening so instead of spending the night in North Italy, we spend the night under Mont Blanc in a very private little campsite with great facilities. We arrived at about 7pm so plenty of time to get set up and have a sit down and BBQ before getting into bed at 11 pm. 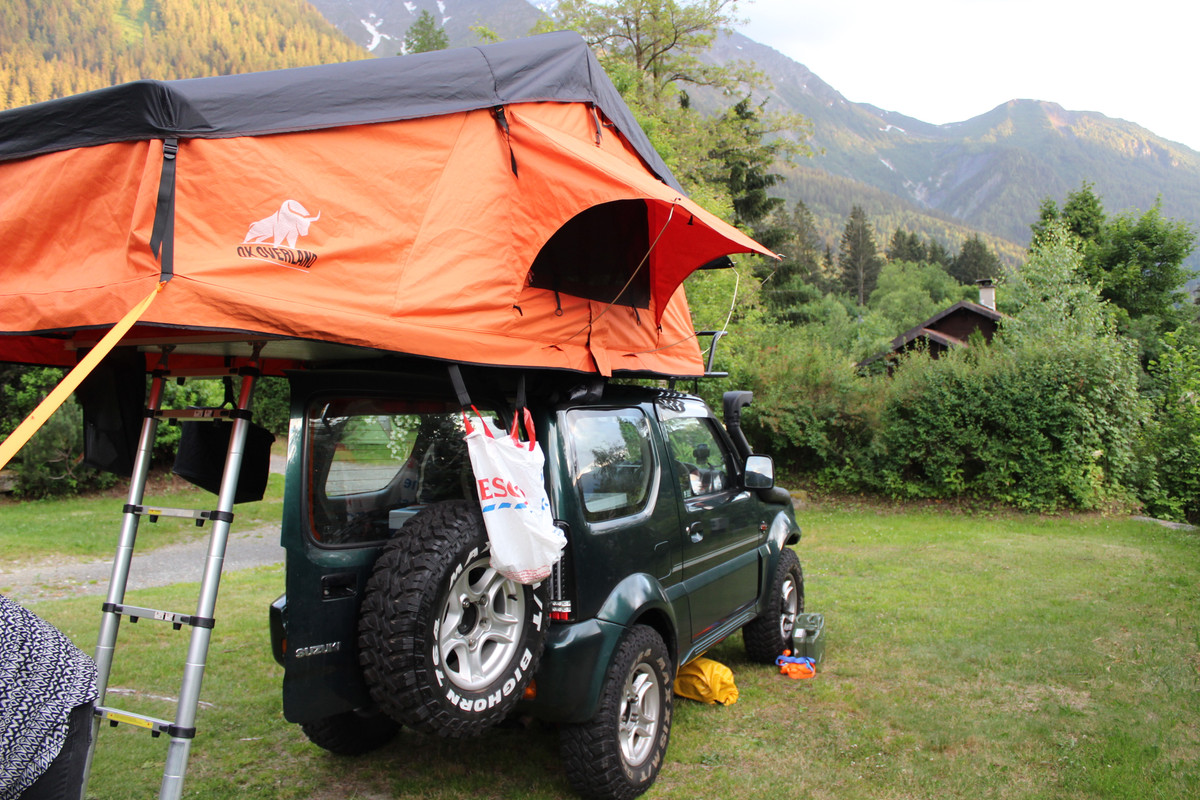 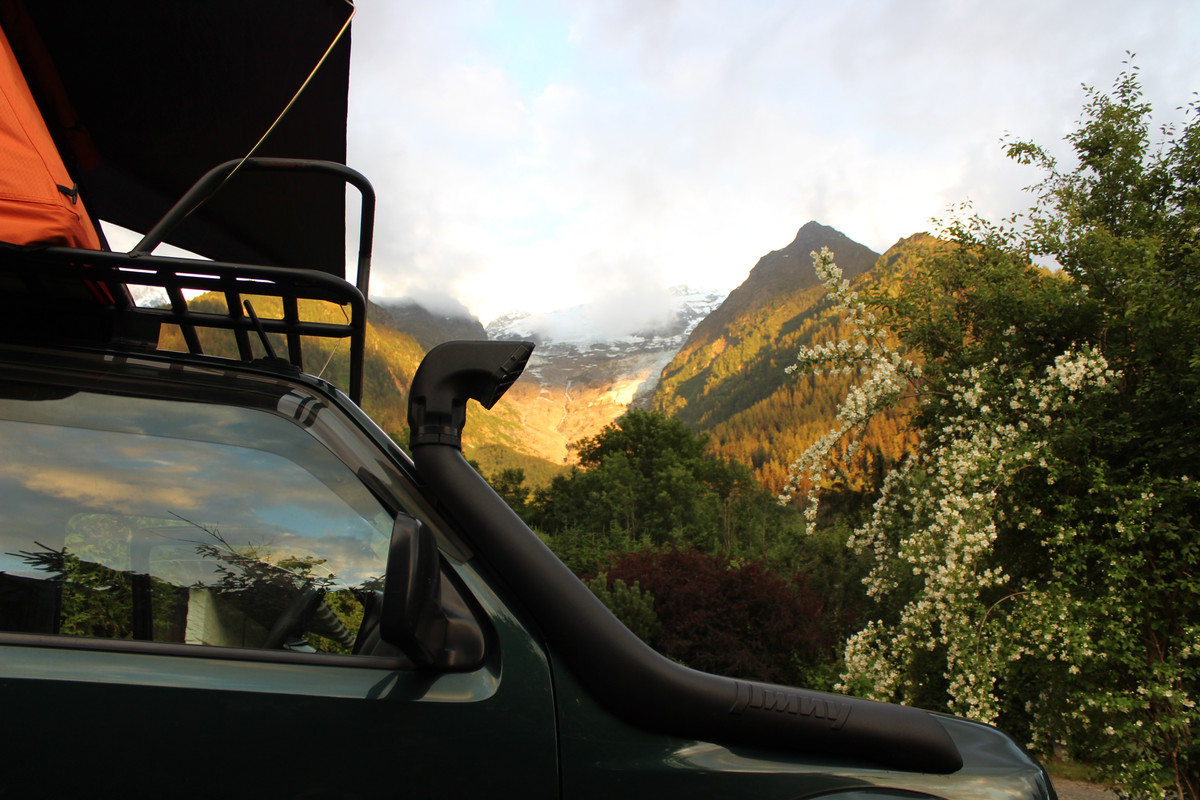 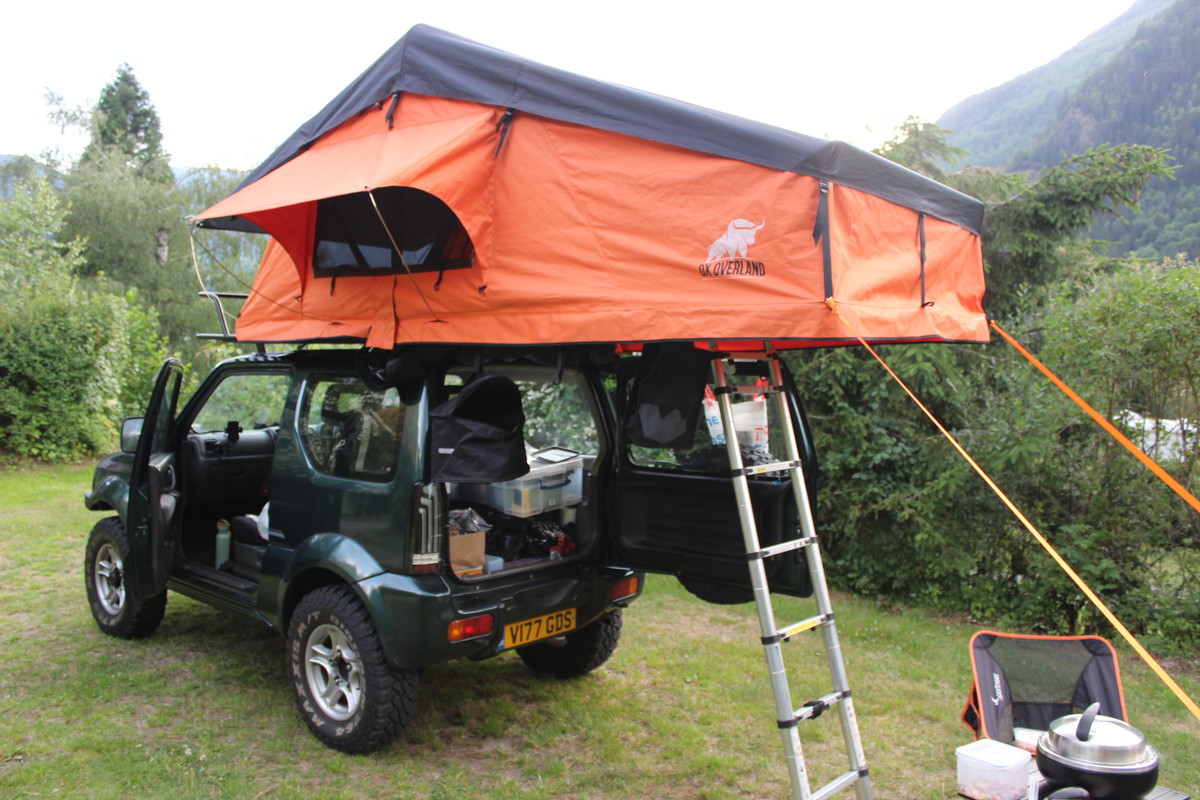 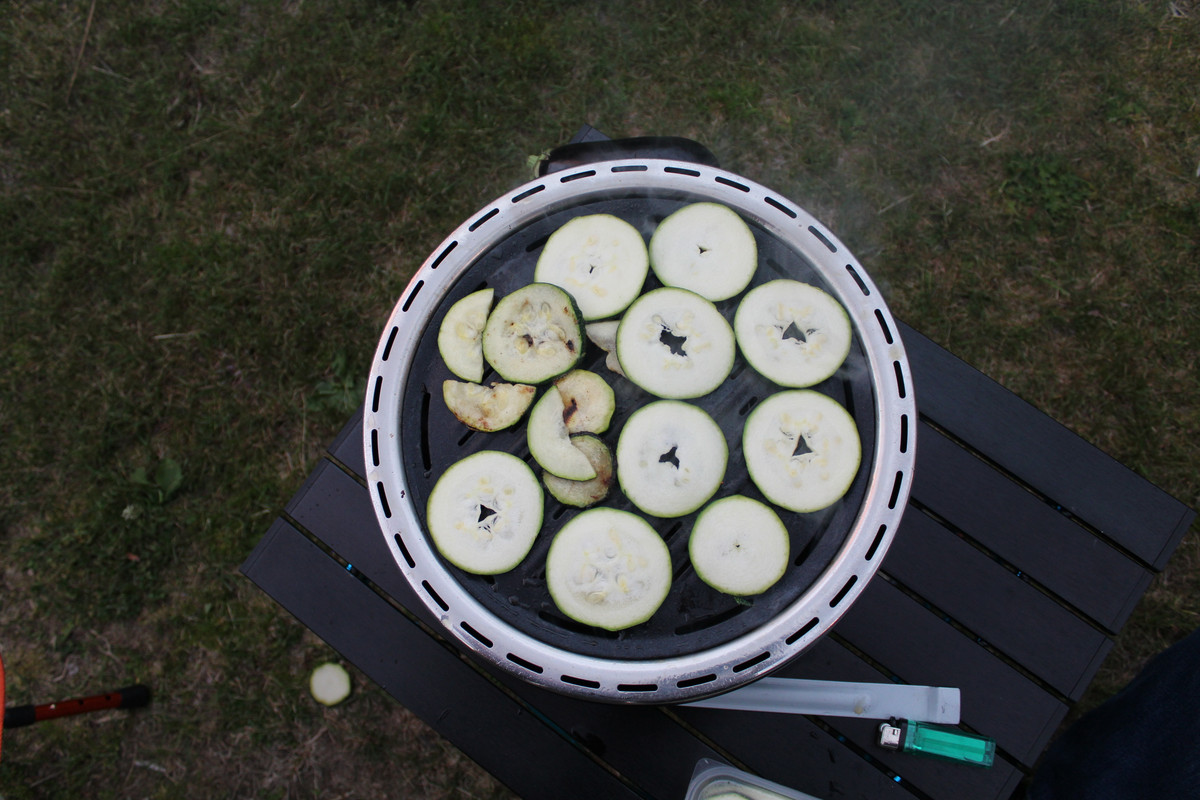 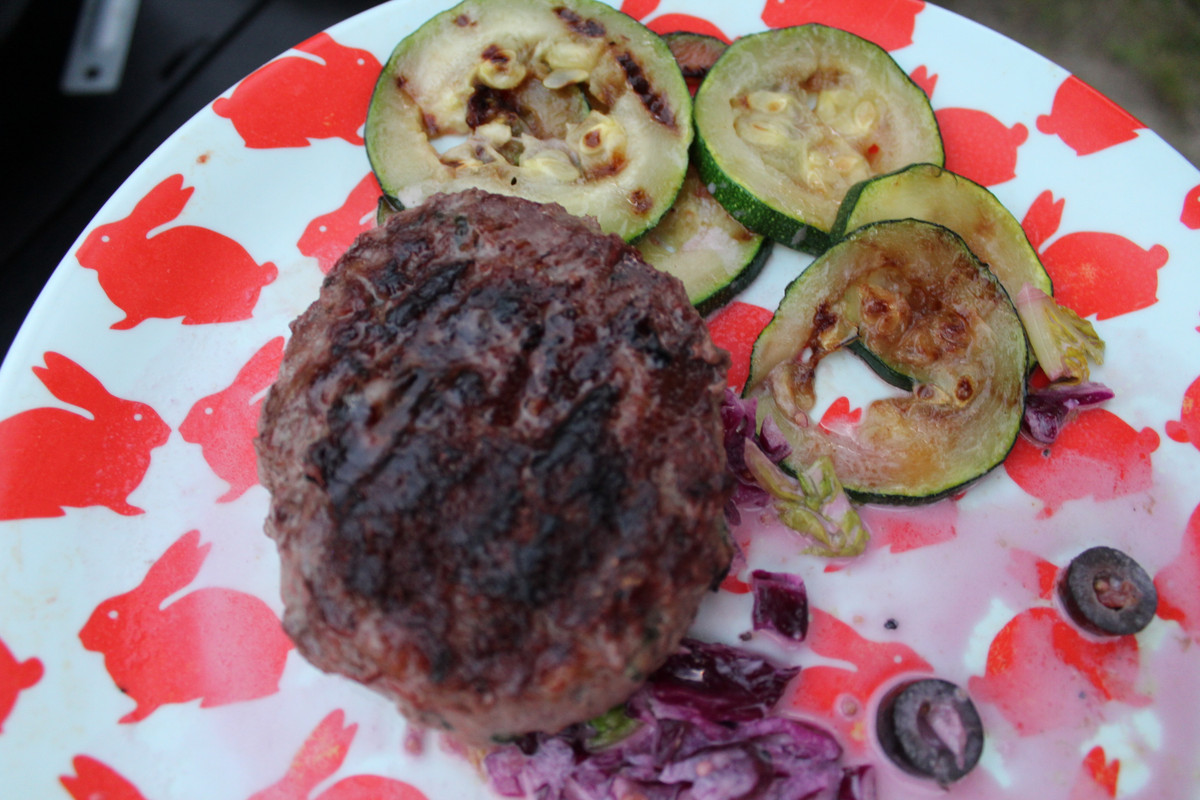 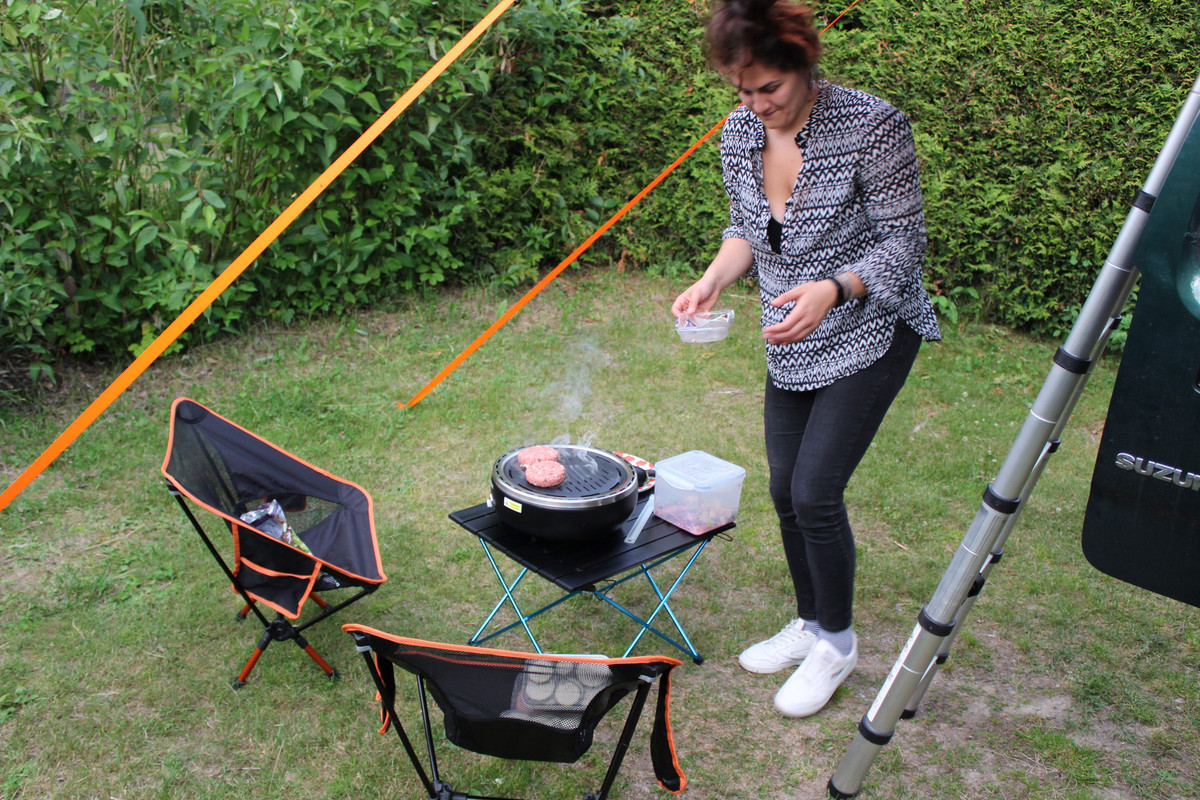 The next morning we were packed up by 8 am and on the road. A quick 25 minute drive up to the tunnel entrance (in 3rd gear) and 45 euros later we emerged into Northern Italy (much to my Italian girlfriend's delight being back on home turf!) 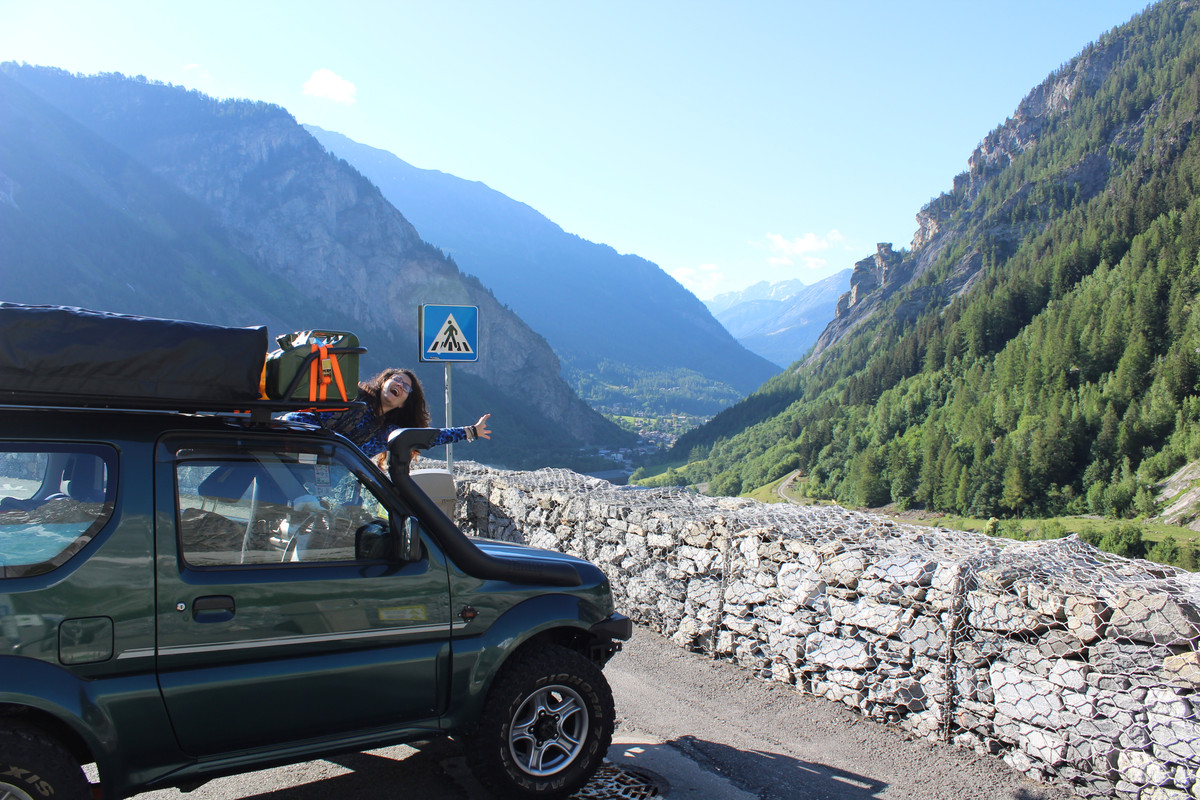 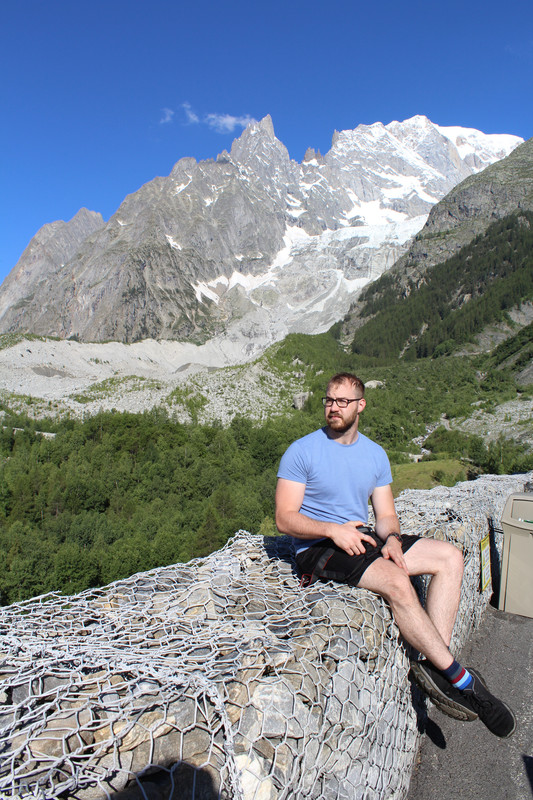 (Note: I thought you had to look at the camera when someone took your photo? My girlfriend asked me to look away into the distance...is this a new thing? Or maybe its just my ugly mug...)

From this point on the scenery was beautiful and much more engaging to drive through. France was a bit flat and uninspiring. We had an 8-hour drive ahead of us down to Genova and along the coast road to Rome. Heavy traffic with lots of lorries and tunnels but all went smoothly up until this point.

We had been travelling on the toll roads thus far (in France and Italy) so we could drive as direct as possible. Now we were in Italy, there were some stretches between Genova and Rome which were non-toll roads which is where things went a little pear-shaped. On one stretch of road, in particular, there were that many potholes the front-right shock absorber blew through its metal housing after a 100 meter stretch of continuous hammering at about 90km/h. 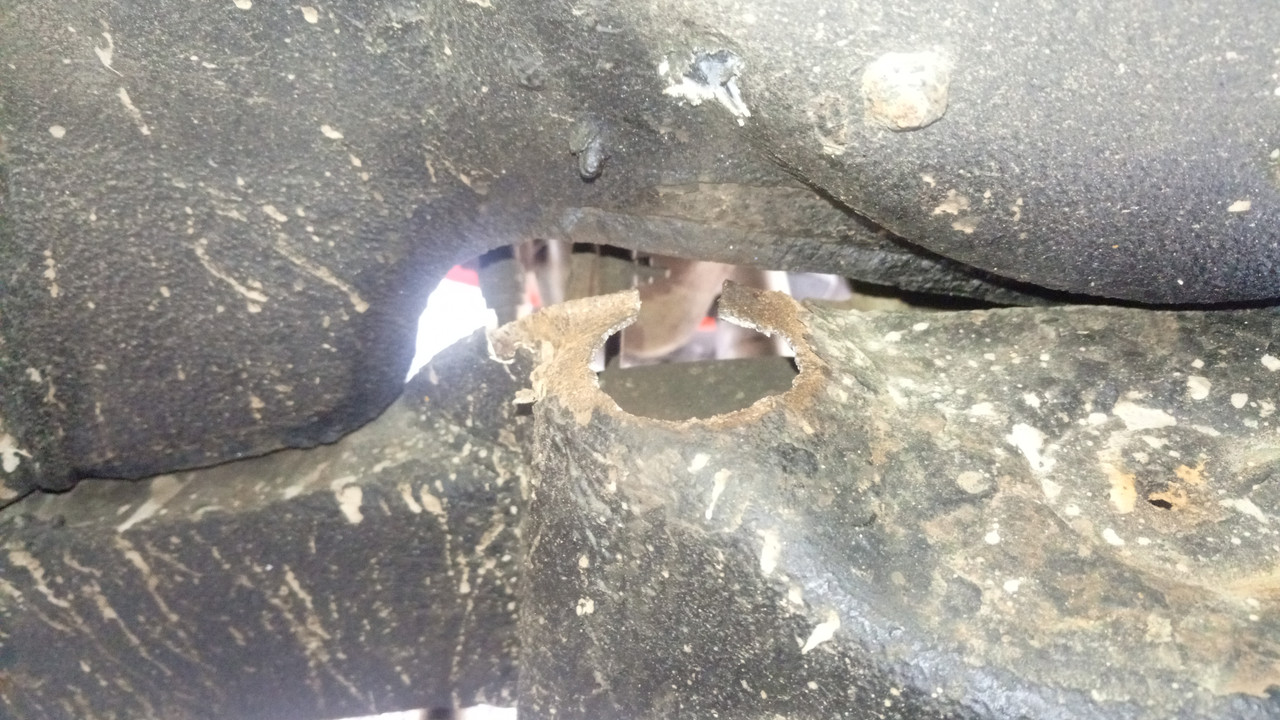 We had about 180 miles still to go at this point so I took it off and we carried on at a slightly reduced pace praying that there were some toll roads to get onto. After about 80 miles we were back on the smooth toll roads and we could drive at normal speeds again but making sure we were well clear of other cars by staying in the slow lane. The car was like a boat on wheels with the shock gone - any small bump to the front axle caused the whole car body to sway left to right for extended periods of time - a little dodgy!

Arrived in Rome at our destination at 9:15 pm on the 2nd day of travelling to some very surprised parents (of the girlfriend) who we hadn't told we were coming over! Jimny is now unloaded and going to a local mechanic/fabricator later today to get patched up and I'll probably have to see about getting some new bushes/metal caps for the top of the shock absorber as they were completely battered having forced their way through the top of the shock mount.

All in all, a good trip! Must admit, I was expecting mechanical problems given how taxing some bits of the alps were and the fact I have no knowledge of what kind of life this car has had for the vast majority of its 21 years on this planet but the engine/gearbox handled it all very well! 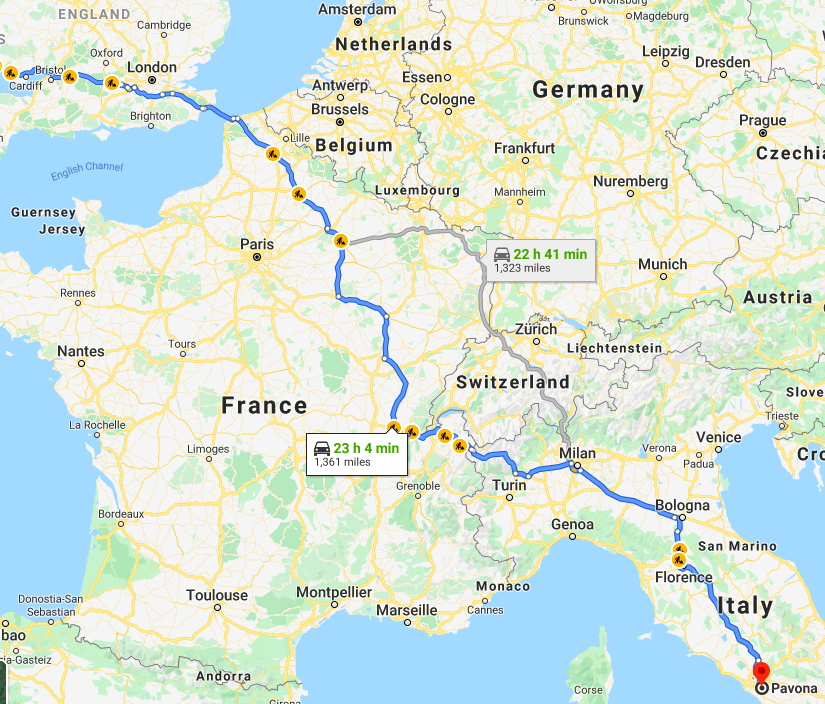 I'll post up a return journey whenever we decide to come back! We will be taking it slower next time and we'll try to visit some other places along the way.
The following user(s) said Thank You: X8GGY, Lambert, jackonlyjack, Riccy, Scimike, sniper, stiffsteve204me, CC Baxter

Less More
24 Jun 2020 19:31 #223956 by Rabid Rhino
Replied by Rabid Rhino on topic Swansea to Rome! 2 Day roadtrip in a Jimny
Did you have to use the word "breakdown" when detailing your journey ?
Looking for a nice clean and straight LHD Jimny..... Not any more.
Got one that seems to have been magnatized and driven through the "Big Jimny Bits" parts stores too quickly so it missed a few items.
The following user(s) said Thank You: Reason2doubt

Sent from my SM-A505F using Tapatalk
The following user(s) said Thank You: Reason2doubt

Less More
24 Jun 2020 21:05 #223959 by Scimike
Replied by Scimike on topic Swansea to Rome! 2 Day roadtrip in a Jimny
Enjoyed that. My cancelled holiday this week should have been in France, so it's nice to see a glimmer of normal starting to come back.
Maybe next year now.
Mike
The following user(s) said Thank You: Reason2doubt

Good luck with it from here on!

Less More
25 Jun 2020 09:15 #223974 by sniper
Replied by sniper on topic Swansea to Rome! 2 Day roadtrip in a Jimny
We had a plant in Verres, just down the valley from Mt.Blanc. I worked there on a few jobs. Driving on the smaller roads is amazing.

I was in to Mini's in those days and one of the Italian engineers I was working with, had an original Fiat 500 Arbath that he took me out in. Fantastic driving but very very scary for people from the flatlands..... Roads heaved out of the side of the mountains, millions of tons of rock just hanging over the road, almost like a mousetrap....

Amazing scenery, thanks for sharing.

Less More
25 Jun 2020 11:07 #223981 by me101
Replied by me101 on topic Swansea to Rome! 2 Day roadtrip in a Jimny
That was a good read, would love to do something like this, but the wife just has no interest.
2007 Little Jim with cheap mods!
www.clsdoncaster.com/my-blog
www.youtube.com/channel/UCeBDekO99Qk2aOmBmSmrI9w
The following user(s) said Thank You: Reason2doubt

Less More
26 Jun 2020 20:47 #224037 by RumbleAndSway
Replied by RumbleAndSway on topic Swansea to Rome! 2 Day roadtrip in a Jimny
Great post. Nothing beats a road trip. Preferably in someone else’s wheels.