Fate may have played a part in the latest.....her Ignis suffered from cost over value in relation to repair and due MOT....so we said just come and borrow our Jimny.....however once you lend something out that's when you'll definatley need it most, so I did a quick search and on that day a cabrio with hard top fitted came on eBay, with 12 months MOT . I messaged the seller who was

20 miles from her location, with an offer.
He replied with a counter offer , that was well within my thoughts. Accepted . He said he would deliver it as he was going to her village the following Wednesday anyway. Apparently he liked the part of my message that read "everyone needs a Jimny in their life!" 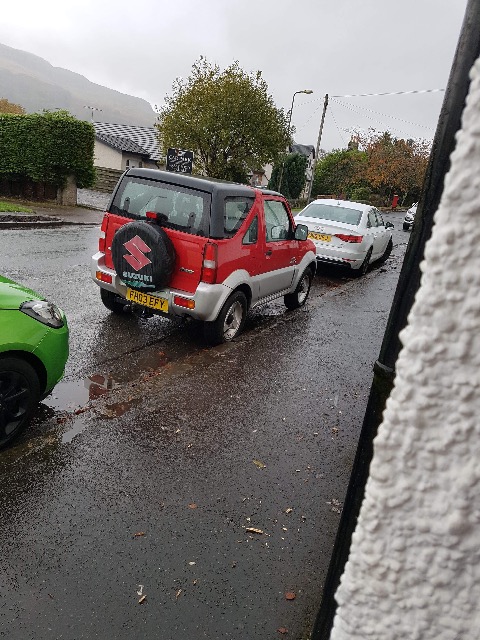 Less More
04 Nov 2019 05:05 #215342 by Lambert
Replied by Lambert on topic Hat trick of Jimmys
I thought we wer being loyal with 2 Jimny and a grand vitara, going to have to start pestering management for a landmaster too. Lucky find that red one being so close and with the fresh test, well found.
Dreadnaught (black 2011)

Less More
04 Nov 2019 18:49 #215366 by kirkynut
Replied by kirkynut on topic Hat trick of Jimmys
Sounds like you have done well. What's the rust situation like, given the part of the country you are in and its age? Have you dared peek at the boot floor under the hardboard?

Less More
04 Nov 2019 21:12 #215369 by Fossie
Replied by Fossie on topic Hat trick of Jimmys
I haven't seen it myself but , My daughter has sent pictures , it's like new under the rear seats ......the last owner collected it from Yorkshire , which adds up to the registration as that is Licolnshire area..