Less More
03 Nov 2010 17:44 #5686 by Iain
Synthetic Winch cable was created by Iain
My steel cable is nackered on my winch, i was thinking of getting this synthetic cable of ebay,
Is it any good? Is there anywhere cheaper? comments will be apreciated

Less More
03 Nov 2010 21:14 #5694 by kirkynut
Replied by kirkynut on topic Re: Synthetic Winch cable
I spoke to lots of people about what winch rope to buy when my one that came on my second hand winch snapped.

General concensus was to buy one made by one of the main known brands - Marlow, Bowrope, Plasma etc. In fact these were the only 3 companies that other members of my club who compete in winch challenges will trust on their trucks.

Then I thought to myself that I'm only going to use it for general recovery, so my Jimny is not going to be suspended on it and considered cheap ebay ropes. I was then warned against them and realised it might be a false economy if I buy a cheap rope and it lasts only half as long.

So I settled on this:

It is a Marlow rope. It is only 9.5mm but it's only on a Jimny. Winch competitors use 11mm + on Landrovers, so I figured for what I want it's the best quality I could afford.

I have since winched up some quite steep slopes at Slindon and realised if the rope snapped, we could have gone over backwards - so I'm glad I bought into quality!

I already had a hawse fairlead though and I notice the one you are looking at comes with one, adding to it's value. I wonder how long the shiney stuff will last before it rusts though?

It's a tricky decision but unless it's made by a well known reputable brand I would steer clear. Give them a call on the number on the add and see who they say it's made by, it might be by one of the big companies. If it is, post it back on here and I might get one myself as a spare! If not I wouldn't bother - it might be good, it might not - but it's a fair bit of money to spend to find out.

When you do decide and buy one, put a layer on the winch and then make it capstain it's self on by winching on the flat to a tree or similar with a medium amount of brake on until you have most of the rope on the drum, increasing the brake pressure the more rope you have on. Some people don't do this and when they have taken a bit of rope of the drum it can spin on the drum. I never allow it to take the last layer off the drum when winching for this reason.

I mention this as no-one told me until I asked what they were doing before a competition. I suspect not many people realise too.

Less More
04 Nov 2010 12:30 #5717 by Johnniehec
Replied by Johnniehec on topic Re: Synthetic Winch cable
Iain,
"you pays your money, you takes your choice"
I bought that very item off ebay a couple of months ago purely and simply because it was the cheapest! Including the hook and fairlead (Aluminium so it won't rust Kirkynut!) and it still cost more than I paid for the winch!
Another ebay bargain advertised as "Hummer 1200Kg" "only used twice" The photo clearly showed the 12000 label and winches are always in lbs and also clearly showed it was on a detachable cradle. Sure enough when it arrived it is 12000lbs, on the cradle and a shiny "new" wire rope and an H2 badge! It's a bit bigger than I was looking for for the Jimny but with the detachable mount, so it doesn't have to be on permanently, and the fact I got it for Ãƒâ€šÃ‚Â£135 I couldn't refuse. I bought the blue rope to reduce the weight, it sits in the boot (yes even with the back seats in place) and is a one man lift, just.
Used in anger only twice so far assisting my team mates stricken Disco and once for self recovery in a Buchan 4X4 club "orienteering" event.
Out again this weekend for another. 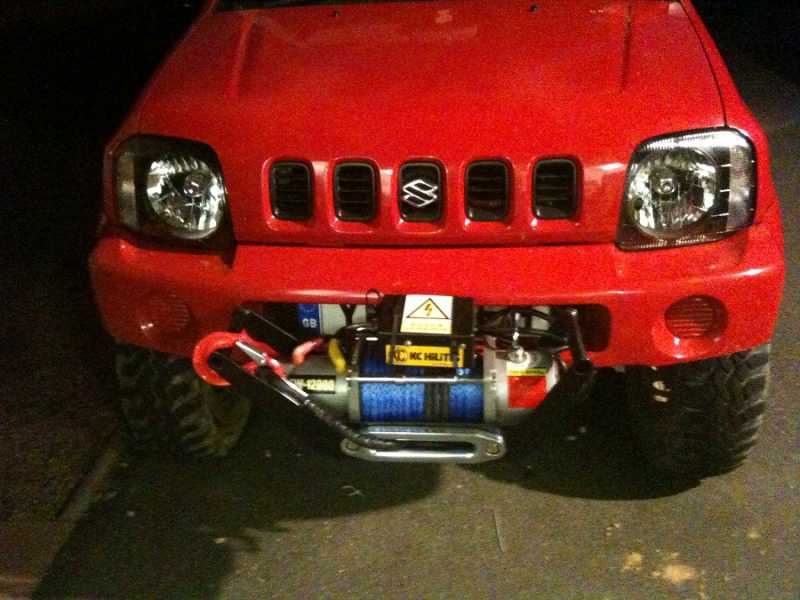 On the 8th Day God made the LandRover -
On the 9th day he swapped it for a Jimny.

Less More
04 Nov 2010 16:41 #5719 by kirkynut
Replied by kirkynut on topic Re: Synthetic Winch cable
Your right Johnniehec it's ally I thought it was stainless and may be not very good stainless but it can't rust!

Like I say, it's a tricky decision. If it's just for recovery from the gloop it could be good value - time will tell on that front.

When my motor was hanging on the rope I was glad I knew what I had though. If you're not going to be in that situation, the worse case scenario is a snapped rope that needs a knot and this rope could be the best for you.

Less More
05 Nov 2010 16:18 #5738 by Iain
Replied by Iain on topic Re: Synthetic Winch cable
Thank you for the advice, I have never had my jimny hanging of the cable, but i do like to take it to remote places.

Can you really tie it back together if it snaps?

Less More
05 Nov 2010 16:41 #5740 by kirkynut
Replied by kirkynut on topic Re: Synthetic Winch cable
The rope from winch solutions is Ãƒâ€šÃ‚Â£60 more when you consider it doesn't come with a hawse fairlead and they are Ãƒâ€šÃ‚Â£30. So as has been said, you pay your money and take your choice.

Yes you can tie them back together like any other rope but the knot will not fit through the fairlead. If it snaps near the hook you can just lose a bit off the length and re-splice it but if it is in the middle the rope will be too short and will need replacing.

That and not getting spiked in the hand by metal are benefits of synthetic winch rope, along with when it snaps it just falls to the ground rather than flying through the air and causing horrific injuries. Hooks and snatch blocks still fly though.

You still need gloves as little stones and flint stuck to the rope can cut your hand.