Images in the article (if present) can be enlarged by clicking on them.

"Most effective" can generally mean in the context of cost, performance, simplicity or endurance.
Using proper tyres properly can be the most effective "mod" in all of those ways!

Overview of the topics covered by this document

First of all, some basic remarks about using tyres on four wheel drive vehicles. Each remark is explained in detail in various chapters of this article.

Choosing a proper tyre type for the desired usage

Tyre designs for passenger and all terrain / light truck vehicles can be (among other ways) designed and built for:

There is no official standard to differentiate various kinds of all-terrain tyre designs.

There are three "industry categories" of all terrain tyre designs, based on loose practical usage classifications (from "worse" to "best"):

Tyre manufacturers usually use this classification to position their all-terrain tyre models in their marketing catalogue.

Advantages of tyres for heavy loads

Disadvantages of tyres for heavy loads

But there is a cost to pay. Read on.

Beware that all Jimny generations (as most vehicles with solid front axles) are highly susceptible to developing a "death wobble" issue produced by disbalance or play in their front suspension.
Improper wheel balance is highly likely to trigger it.
Retreaded tyres (even those with ordinary on-road treads) are notorious for being hard or impossible to balance.

Here is a document (made by forum user Bosanek) which summarises all arguments FOR and AGAINST using retreaded tyres.

The tread design of each tyre has two important pattern layouts:

These two pattern layouts directly determine / constraint in which orientations and positions a certain tyre can be used on a vehicle.

The pelicularities of each layout will be discussed below. 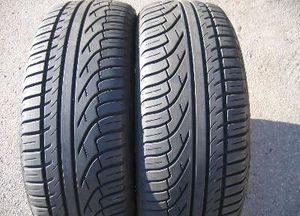 Why would you want to change your tyre size?

When a wheel diameter is changed by a certain amount, the vehicle's (and the axles') ground clearance will change by only half as much (by the amount of wheel's radius change).
Basic school geometry explains why.

However, increasing the wheel circumference/radius incurs the following technical issues:

Some of these technical issues can be (and usually have to be) remedied in case of significant tyre size increases:

Using a non-factory tyre size might be illegal or require some vehicle recertification, depending on country or region.

The standard method of calculating fuel consumption in practice (in "l / 100 km" measuring unit) is:

To continue on the above to examples:

The percentage of change in wheel circumference between stock tyre size and other commonly used sizes with Jimnys can be found in one of the tables in the chapter "Compatible & interesting tyre sizes for Jimny wheels".

Depending upon trim level, Jimnys 3 are supplied with either alloy or steel wheels, sized 5.5Jx15 ET22.

Valid for all Jimnys 3 (with exceptions noted below):

These are the known exceptions:

Valid for all Jimnys 4 (with exceptions noted below):

These are the known exceptions:

If you want to be certain if a desired non-factory tyre specification would be officially approved, then check with your local Suzuki dealer!

Jimny 4's stock tyre size of 195 / 80 / R15 is already quite good for all-terrain use. The only possible non-extreme size upgrade from it is to:

A side note: If your desired tyre model is not available in Jimny 4's stock size of 195 / 80 / R15, a good "close match" alternative is the size 205 / 75 / R15. With that size, you will lose only a negligible 2 mm of ground clearance and the negative consequences of having (only) 5% wider track will not be significant.

For any Jimny generation:

MT class tyres, and especially "remoulded" (retreaded) tyres, typically deviate significantly from their theoretical sizes (they tend to be quite larger)!

This was a quick and simple guide to the issue of tyre sizes.

If you have or expect collision issues between your existing or planned tyres and the vehicle, you can remedy them by Lifting the vehicle and/or by Trimming the wheel arches and/or by trimming the front bumper.

If you use a pendant-style tow bar mounted bicycle carrier, a wider spare tyre might collide with the bicycle carrier. This depends on how long the tow ball + tow neck section is.
Read "Tow bar" and "Bicycle carriers" wiki articles for more information.

This chapter is for those who want to fully understand the possible effects and issues when using non-stock tyre sizes, and for those who intend to use significantly larger tyres than the stock size ones.

First of all, some general remarks about the tables below:

The availability of different tyre models in a desired tyre size can vary significantly.
Not all tyres are manufactured in every listed tyre size for every market or all the time.

Not all of those tyre models in the list are available in sizes which are compatible for Jimny. Sizing availability might depend on the market, and can change for better or worse at any time.

Therefore, once you settle on your desired tyre size, now you can browse through tyre models and choose the one which is available in that size and suits your criteria the best.

Info about stock tyre models as fitted by Suzuki:

Here are the AT tyre models with which Jimny owners have had great or quite good experiences with:

If you insist on heavy-duty off-road performance (but still want to retain some on-road credibility), there are three such MT class tyre models with which Jimny 3 owners have been relatively satisfied with:

However, there are some rules and restrictions when actively using five same tyres - read more in the following subchapters.

Buy and use five same (identical) tyres! The spare tyre should not sit idle all the time! That is even written in each Jimny's owner manual.

The five-tyre rotation scheme is especially suited to practice when using all-season tyres. Many AT-class tyres are all-season.

If you have a hard or soft spare wheel cover, you won't be able to use it with a spare tyre which is larger than the stock size.

Using (periodically rotating) a matching spare tyre together with the other four tyres is strongly recommended, as per the above chapter "Using five identical tyres".

However, if, for whatever reason, a non-matching spare tyre has to be used on a 4WD vehicle, special caution has to be applied in order to avoid expensive transmission damage!

This subchapter is a guide what to do in this unfortunate event.

First of all, a non-matching tyre in this context means any of the following:

The cause of the issue with using a non-matching spare tyre:

So, if one of your front tyres get punctured, just replace that wheel with your non-matching spare wheel and tyre.

However, if one of your rear tyres gets punctured, the procedure would be:

That's a lot of work if it's hot, cold, wet, dusty, raining, windy or night time! But it is the only proper way.

If you get a puncture in the middle of offroading where you need 4WD to get to civilization, you are in trouble.

Changing your tyre pressures to suit the (off)road conditions is the most effective vehicle mod ever!

When tyre pressures are reduced (for any reason), vehicle's top speed should be limited to approx 50 km/h / 30 mph on tarmac roads, or ~ 40 km/h / 20 mph on gravel roads. Otherwise, the tyres might overheat and disintegrate prematurely!

Increased contact area between the tyre and the ground has two negative side effects as well:

However, these two disadvantages are more than compensated by the following:

The choice of an analogue vs. a digital pressure measurement tool comes down to this:

Conclusion: It is best to have one analogue and one digital tool, to back-up one another.

Two most important operational parameters of an air compressor are:

Other attributes of a portable air compressor to consider are:

However, there is one type of tyre air deflation tool which is certainly worthy of consideration:

The procedure to perform an (almost) parallel two-tyre deflation with these tools: 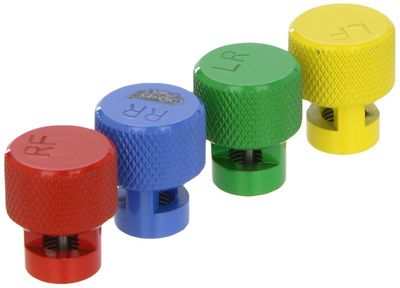 Draper 22487 tyre deflator, serving as an example of a useful and cost-effective tyre deflation tool

All Jimny generations, as all vehicles with solid front axle suspensions, are susceptible of developing a "death wobble" vibration at a certain speed range.

Since wheel disbalance can easily cause death wobble, you need to take additional considerations in order to balance your wheels properly.

Types of wheel damages and repairs

Types of tyre damages and repairs

Educate yourself more about tyre section repairs through this and this article.

Reference for the explanation of the nature of indentations in tyre's sidewall is this article on Continental's web site.